THE one hundredth psalm is a beautiful poem that climaxes six consecutive psalms of thanksgiving. In this poem all peoples of earth, friendly and hostile alike, are invited to join Israel in offering thankful praises to God for His abundant mercies and blessings. Verses four and five of this psalm, above all others, have captured the spirit and intent of thanksgiving in a moving appeal:

"Enter into his gates with thanksgiving, and into his courts with praise: be thank­ful unto him, and bless his name.

"For the Lord is good; his mercy is ever­lasting: and his truth endureth to all gen­erations."

A more passionate picture of true thanksgiving would be difficult to find, in­deed. For simple elegance of expression, taste, and joyous appeal, this is unsur­passed. Its spirit moves us and steals upon the heart like a contagion. And how ap­propriate at this harvesttime, when fields are garnered and storehouses are filled with the year's plentiful fruitage, that this spirit be recaptured and restored to our Thanksgiving celebrations. How wonder­ful it would be could individuals and na­tions alike rekindle the spirit here set forth.

To do this we shall all need to reassess the harvest of our moral and our material stores, first individually, then nationally. To achieve the truly thankful spirit as is here shown will require a new sense of values, a clearer look at the Source of all our blessings, and a sharp appraisal of past and present motives and measures of man.

The story of the life of Louis Di Paola is more than a typical American success story; in point, it is a true story of a model thankful man. This immigrant fruit ven­dor from Italy pushed his cart in New York City's Lower East Side for fourteen hours a day and loved it. His radiant spirit and cheerfulness won him steady clients,

and sooner than most of his kind, he parked his cart and operated behind the counters of his own fruit stand. Later he bought a small store in Brooklyn, and busi­ness grew phenomenally; so did his smile and his praises for his America! He be­came a wholesaler, became wealthy—a completely successful though unlearned businessman. Then came the depression of 1929, and with it disaster for Di Paola. In a few months he lost his stores, his stocks, and his savings!

Radiant and smiling as ever, he went back to his fruit stand! When asked whether he was still glad he stayed in America, he replied after a long pause, "When I came to America my pockets were empty. They are empty again. Has America taken anything away? It is not what is in my pockets that gives me joy; it is to be a man among equals. Here, I am still a man. I thank God every day that I am in America."

This is the spirit and the genius of true thanksgiving wherever men are found. True thanksgiving to God did not, of course, begin in America. One may be justly proud of successful achievement in any area. But pride of achievement is one matter; true thanksgiving stems from a deeper, a more significant matter. It grows out of the will to climb above past fail­ures; it emerges from the spirit to try again when all has been lost; it arises when there is opportunity to show faith and trust when all else appears to crumble; it springs from the mere chance to achieve manliness, dignity, and godliness, and to compete with illimitable equality among men. These causes for thanksgiving are not circumscribed by geography or time, caste or clime; for they know no bounds. These privileges are among the basic ingredients of gratitude.

When the mass of its peoples has cap­tured the spirit of a Di Paola, the image of a nation will change from one of fears and frustrations—which now seem to hold so many in their grip, shall we say—to one of trusting and thankful people. Then—

"Come, ye thankful people, come Raise the song of harvest home! All is safely gathered in,

For our wants to be supplied; Come to God's own temple, come; Raise the song of harvest home!" —Henry Alford

Did not this spirit jell the intent and purposes of the Pilgrim Fathers? Were they not thus lured to cross uncharted seas to an unknown America? And was it not this spirit that prompted the first truly American Thanksgiving at Plymouth Col­ony in 1621? Let us look again at the for­tunes and faith of the nation's founders and be thankful for our God-fearing fa­thers.

Recall how winter and hostile Indians, starvation and disease, had all taken their toll of those pioneers. Then remember that it was the will to survive, the capacity to endure privation and death, and the spirit to live the life of God from one's own choosing, longing, and desire that moved the newcomers. These were the qualities of character that compelled those daring settlers to sink their plows deep in the soil, to plant their seed in the goodly new earth, and gently and courageously to tend their crops with a tool in one hand and a weapon in the other.

Then came harvesttime and happiness! And it pleased a grateful people to do the most natural of decent things their thank­ful hearts could dictate—they celebrated the first Thanksgiving. Governor Bradford decreed the thankful assembly, and a joy­ful people worshiped their God and blessed Him whose "mercy endureth for ever."

The Pilgrims put aside their fears and their weapons, and spread upon tables the best fruits of their labors—foodstuffs in plenty. And they invited hostile Indians to share their feasting and rejoicing. Pilgrims and Indians laid aside their fevered differ­ences and sat side by side before the feast; they ate wild turkey and venison, corn and winter vegetables. They consumed dried fruits and pumpkin pies! Then they arose from their merriment, filled and thankful; thankful for a good harvest of food, for peace—temporarily—in the colony, and for the opportunity afforded them to dig­nify their lives and those of the Indians with whom they now shared their blessings.

That first Thanksgiving set both the stage and the tone for all the thankful seasons that have followed on the Ameri­can scene. And for spirit and intent it was not unlike that initiated for all peoples by Israel of old. That ancient model of true thanksgiving has been and continues to be prophetic of genuine thanksgiving for all generations and nations for all time.

What examples of true gratitude and ex­emplary fellowship—even with enemies— have been left us by our spiritual and our national fathers. And who of us has not thrilled to stories of their courage, of faith in God and in their fellow men, and of devotion to duty and the right in the face of imminent danger!

One sometime wonders what has come over us, their children. For who among us demonstrates the same spirit and resolu­tion of our fathers? What undignified, un-Christlike obsession now has hold of us that reproduces so little in us of that we so much admire in them?

How sadly true it is that the grateful spirit and high courage of a Di Paola was never more needed individually than it is today!

"And why do the nations rage" and be-have so contemptuously? Are deceits and treachery now their masters? Even the smaller nations startle the imagination with their defiance and reckless daring. The weak now talk like the strong; and the pagan chides and challenges the Chris­tian: the helped outrages the helper, the lawless penalizes the lawful, and all too often national honor dies before gratitude is born!

O that there were dozens of spirits like Governor Bradford's to lead earth's mil­lions within the nations! Then might the nations' millions themselves recapture the thankful heart that was the Pilgrims'.

This is clearly the climate in which to review our moral and spiritual harvests, and to reassess the inflammatory isms and ologies that have divided the nations, and that now threaten security and national existence. For it is still the grateful heart more than any other that thankfully turns to the Source of its blessing and is most willing to share its good things. Isms that breed strife, resentments, and suspicions cannot thrive in the atmosphere of praise; but respect, appreciation, and mutual con­fidences will grow in no other. For this reason thoughtful and thankful people everywhere welcome the advantages and

opportunities of sharing their blessings, and their hearts thrill again with the re­turn of every challenge to dignify the lives of fellow beings.

But let's face it. With others this is not so! For the hoarders, the self-sufficient, the cowardly, the arrogant, the fiendishly in­different to the needs and wishes of others, are the real fomenters of all our strife. These resent sharing in any form, for they have ungratefully forgotten a sim­ple but unfailing law of life. Either we do unto others as we would have them do unto us or we reap as we have sown; either we share and be thankful or we withhold and prepare for the reactionary storm.

The happiest and most thankful people on earth are those who are doing the most to dignify the lives of others by sharing life's blessings wherever they are needed. So at this thankful season let us pray, "O God of our grateful fathers, renew in us Thy Spirit, who sends His rain and rains His blessings upon all alike! Amen." 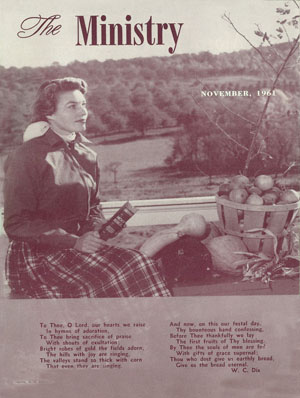