The day Columbia disappeared: How one church coped with a major tragedy

The day Columbia disappeared: How one church coped with a major tragedy

Saturday, February 1, 2003.1 was walking across the kitchen to put the cereal bowl in the sink when the phone rang. "Who's calling us so early?" I said to my wife as I picked up the receiver. It was our daughter. "Dad, did you hear the news?" she asked.

"Columbia went down this morning."

The words sent a shock wave through my mind. I flipped on the TV. There, spread across a luminescent sky, clear for all to see, were the scattered remains of what had once been the pride of American technology.

We all saw the white contrails sprouting off the white dot that was the spaceship that took with it seven brave persons. The burned fragments spiraled toward earth in a wide path of destruction like so many cast-off tendrils.

I knew that this Sabbath would not be worship as usual. I, along with millions of others, witnessed a national calamity! The loss of Columbia and its crew was one more link in what had become a chain of emotional shocks that have shaken America and the world to its core.

I knew that many of my church members would not have heard the news, but when they did, they also would experience shock and grief. Thoughts began to pile one upon the other.

Follow the planned service and include a moment of silence? Cancel the worship service? Change the sermon topic as printed in the bulletin and start over? What would a new service include? Who should participate? Can we pull it off on such short notice?

When traumatic events occur that impact life on a global, national, or local level the opportunity is ours to respond in ways that will bring hope, comfort, and assurance to our congregations. The worship service provides a meaningful setting to initiate a healing process. That's what our church did that fateful Sabbath morning turned a major tragedy into a sober search for under standing loss and affirming hope.

Within twenty minutes of hearing the news, I decided we would change the planned service. I made my first phone call that morning to the White Memorial Medical Center switchboard. I explained to the operator what had happened (he had not heard the news) and requested that he contact the three chaplains and ask each to call me.

The calls were returned within minutes. I invited each one to join me in the worship hour. One of the chaplains had a previous appointment. The other two readily agreed. We decided that we would share with the congregation how sudden loss and grief affect us and simply recognize that bad things happen. We also wanted to touch on how families can talk with their children when there is a tragic event. Our presentation would be in the form of a three-way, spontaneous conversation.

I arrived at the church at about 9:15, went to my office, and began to implement the program design that had been developing in my mind. I felt that the traditional memorial service would fit well. A call to the church organist, who had not heard about Columbia, brought assurance that he would leave immediately for the church. Together we would select appropriate music. We wanted hymns that proclaim hope and assurance, and I wanted the organist to play a meditative piece at some point in the service.

Our multimedia operator came to the office. He had not yet heard the news. His first response was to begin a Web search to find pictures of the Columbia and the seven astronauts. I sent someone to locate the choir director. She also had not heard the news, but when I explained to her our change in plans, she said she would look at the morning anthem to see whether it would fit the occasion. She decided to choose another piece. After exploring several options it was decided to have the choir join the congregation in singing "Eternal Father, Strong to Save," the same hymn that would be sung a few days later as part of the National Memorial Service.

I decided that the ministry staff would take the leadership role during the service. It is important in a situation such as this to have worship leaders who are known and trusted by the congregation.

I asked an elder to inform the participants listed in the bulletin that we were changing the service and we would implement the originally planned program on the following Sabbath. The Scripture lessons, like the hymns, were selected based upon their strong statements of assurance, hope and faith. I copied both Old and New Testament readings from the translations I liked best and gave them to the readers.

The children's story offered opportunity to share with the children the impact that an event such as the loss of the Columbia has on our lives. Children understand loss. Every child has experienced loss in one form or another. Kids listen as adults talk about tragedy, and they have questions. The time with the kids provided an opportunity to share with them how the loss of Columbia touched our lives and why its loss makes us sad. When the children had come to the front, as is our usual practice, I began with a question: "What have you lost that made you sad?" The response was immediate: "My dog died." "I lost my bear." "Our bird got away." "My best friend moved away." "My grandma died."

We talked about how it makes us feel when something important to us is taken away from us. I brought the discussion around to Columbia and explained what had happened earlier in the day and why it made me sad. Our time together ended with a reminder of the promises of Jesus and that in heaven there is no sadness or loss. I then asked our children to pray for the children whose parents were on Columbia. (The children's story is as much for adults as for the kids.)

When the time came for the sermon, we pulled three chairs to the front of the platform. I sat in the middle, the two chaplains on either side. After a brief introductory statement, I asked one of the chaplains to explain how loss affects us and how we can deal with the grief that accompanies loss.

The conversation followed a question- and-answer format. The chaplains' responses guided the discussion. After about 20 minutes, I concluded our conversation with a summary statement and invited the congregation to join in a time of silent reflection and prayer.

At the start of the service, the multimedia coordinator had gone across the street to the Medical Office Building, where he had access to his high-speed computer, and pulled pictures of the astronauts from the Web. He projected each astronaut's image on the screen as we sat in silence. This quiet time allowed people to reflect on the event and begin to deal with the loss. Many expressed their sadness through tears. The service ended with the hymn "O God, Our Help" and a benediction.

Our people's response to the service was immediate and positive. Some expressed appreciation that they had been given an opportunity to share the loss with others. They found com fort in being with their friends and fellow Christians.

Two visitors commented that they had never seen a worship service where loss was discussed and people were led to understand how we may find healing and resolution when tragedy strikes.

Even though we have resources that other congregations may not have, our experience demonstrated that it is possible to present a meaningful worship service in the midst of great and sudden tragedies. The Holy Spirit can turn traumatic moments into affirmations of hope. 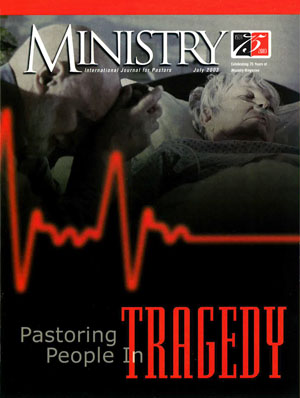