On September 20, 125 years later, church leaders, members, government officials, and friends met to celebrate and thank God for what they called “His rich blessings through the years.”

More than 140 people said they enjoyed the event.

On behalf of Argentina’s government, national secretary for worship Alfredo Miguel Abriani addressed those in attendance. “We greatly appreciate the work and contribution the Seventh-day Adventist Church has made through the years,” Abriani said.

South American Division president Erton Köhler shared, “To be here is to renew our commitment, vision, and especially the mission of carrying the gospel that our pioneers loved so dearly. God is now giving us the opportunity to finish what they started.”

The ceremony also launched a special time of evangelism across Argentina. As part of the 125th-anniversary celebration, Nélida Ifraín and Griselda Dupuy were baptized. They were the first two of many at evangelism centers and local churches across the country. Those evangelistic activities resulted in 1,417 baptisms.

Just outside the renovated original church building (which now serves as a museum) and the new local church, leaders unveiled two plaques marking the event. The wording of the plaques stresses a commitment to the missions the pioneers loved so much.

“We will keep proclaiming the gospel of Jesus,” church leaders said. “We must finish the mission entrusted to us.”

Jonathan Walter, media and communications manager for the General Conference Ministerial Association, speaking of a group of young people from Generation. Youth. Christ (GYC), said, “We want to be a praying missionary movement. So, we prayed, and God put on our hearts the country of Iceland.”

A highly secular, wealthy, postmodern, and progressive country, Iceland is, without question, a mission field. As Walter and his team asked God to show them how to reach the people of Iceland, particularly those in the capital of Reykjavik, which was chosen as part of the Mission to the Cities efforts, they realized the most radical thing they could do was pray.

“By God’s grace, inspired by Ellen White’s words that ‘prayer and faith can do what no power on earth can do,’ fifty missionaries from six continents came together to pray for Iceland,” Walter said. “We spent hours praying together, asking God to empty us of ourselves and fill us with the Holy Spirit, interceding for the mission field before we went out.”

Once they felt it was time, the group entered Reykjavik loaded with GLOW tracts and on fire to share their message with the city. After several days, the group had not only been able to give tracts to the leaders of the country but also collected thousands of prayer requests, which they shared with each other for constant prayer via WhatsApp.

“We haven’t stopped praying for these requests since we returned,” Walter continued. “People will be running to know who this God is who answers prayers. It’s nothing we have done but what God did. He is willing to work with us when we make ourselves available. Prayer is the beginning of mission.”

Every single Iceland Conference employee has committed to being “in charge” of prayer ministries. Prayer is and will continue to be a strategic focus for this small conference.

The Adventist Church’s most comprehensive one-volume Bible study resource has just extended its reach in a big way, according to an announcement by Andrea Luxton, president of Andrews University. 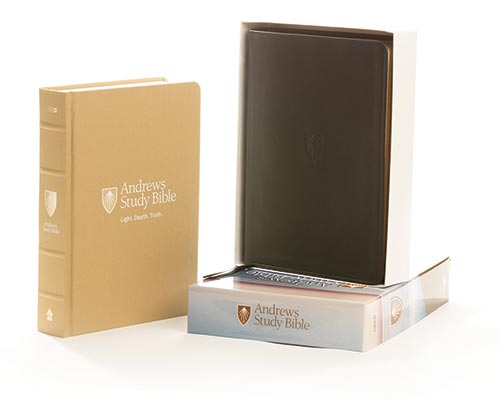 On Thursday, September 5, 2019, the University released for sale the long-awaited New International Version (NIV) of the landmark Andrews Study Bible. In addition, nearly 700 new students at Andrews will receive a complimentary copy from the university, continuing a tradition that began in 2011.

Ronald Knott, director of Andrews University Press, said that in addition to the thousands of study notes, the most important feature of the Bible, generally not found in other study Bibles published by evangelicals, is the linked theme reference system that connects, in a systematic way, many of the key teachings of the Bible.

“This is the core of the value of the Andrews Study Bible,” Knott said. “You can trace any of nearly thirty key themes or teachings of the Bible, starting almost anywhere, to get a broad understanding of how the Bible addresses these important topics. That system is supported by a rich theme index in the back, along with other study notes.”

“Back in 2008, Dr. [Niels-Erik] Andreasen said that the ultimate purpose of the Andrews Study Bible was to ‘produce a work that is academically credible, theologically sound, and practically useful for the individual lay reader, and for wide distribution in Adventist evangelism,’ ” Luxton said. “That purpose has been lavishly fulfilled in the years since and will be even more so now with the new edition in the NIV.”

The Andrews Study Bible is also available in Spanish, Portuguese, and Romanian.

A theology of leadership for pastors

What every pastor should know about disabilities

Hannah in the temple

​The end—and the beginning

The Second Coming and the time of trouble: A great time to be alive

The Funeral: The Ministry of Mourning Sabbath Funerals

​The end—and the beginning