Adventists and Military Service: Biblical, Historical, and Ethical Perspectives, a book of eight essays, is intended by its editors and authors to reflect “on the role of Christ’s followers as conscientious agents of peace and as conscientious objectors to all forms of violence” (7). The book is thoroughly documented and annotated so as to qualify as a work of scholarship but is written in styles simple enough to make it accessible to laity and pastors as well as scholars. It is well designed, as intended, to “give guidance to our young people who are increasingly faced with issues about military service” (8).

The two opening essays cover Old and New Testament views on war. The first of these, by Barna Magyarosi, demonstrates that the “holy war” pattern of the Old Testament had only very limited ancient sanction and provides no mandate for nontheocratic Bible-believers in the modern era. The second essay, by Johannes Kovar, shows that Jesus and the writers of the New Testament valorized reconciliatory peacemaking and offered no excuse for military violence. Even Paul’s counsel of subordination to the government in Romans 13 presents the government as an instrument of civil order, not of military action. Indeed, it might also have been noted that Paul presents the role of the government as “bearer of the sword” entirely from the perspective of an outsider and never anticipates any Christian participation in this role.

The approach of these essays reaches outside the traditional Seventh-day Adventist concerns regarding military service. Usually, we have preoccupied ourselves with the issue of not being involved in combat, but, particularly since the First World War, we have often failed to deal extensively with the morality of war itself. Zoltán Szallós-Farkas’s essay (chapter 4) makes a good start on this task, tracing the historical development of Christian attitudes toward war and military service and offering a brief but enlightening explanation of the just war theory in both its Christian and post-Christian development. 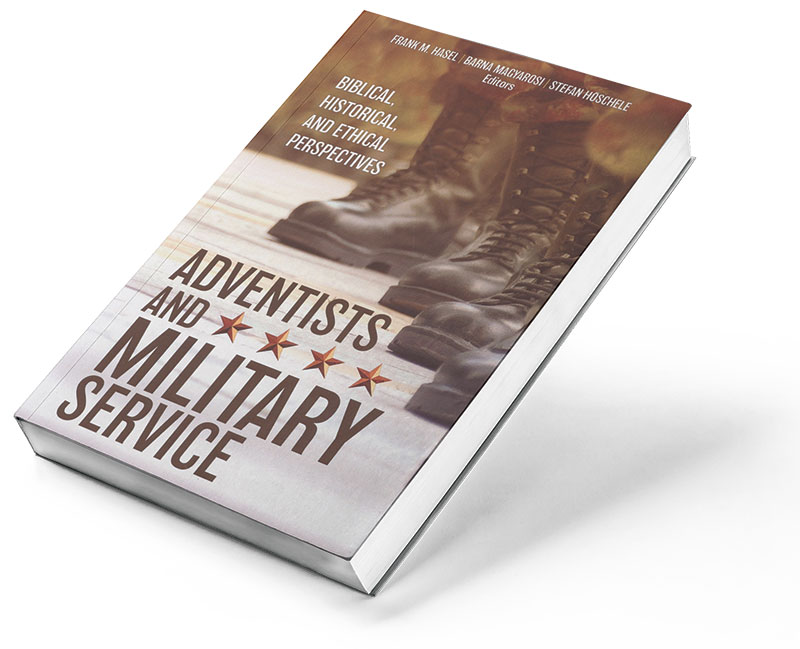 Kwabena Donkor’s essay (chapter 3) adds the interesting insight that war in the modern world is often caused (or greatly aggravated) by ethnic tensions. If such sins as racism and ethnicism lie near the basis of modern war (and this seems to have been the case even in antiquity), then Christians cannot keep themselves unspotted from the world merely by refusing combatant service while simultaneously giving tacit encouragement to their governments to persist in war.

The essays by Douglas Morgan (chapter 5) and Daniel Heinz (chapter 6) chronicle the gradual, undeliberate, and almost unconscious drift among Adventists, particularly in America and Europe, from explicit moral objection to war to acquiescence and, ultimately, to cooperation, a shift that seems to have been motivated more by a desire for approval and toleration than by serious theological considerations. Historically, as Szallós-Farkas shows, the general acceptance of the permissibility, legitimacy, and even the duty of military service by Christians is a legacy of Constantinianism, the heresy that, by confusing church and state, places the state as the ultimate moral arbiter. If this is so, then one must ask whether Adventists, by shifting from an initial nonviolent and anti-war position to tolerance and sometimes even to tacit approval of war, have fallen into the same moral decline that led not only from Sabbath to Sunday observance but also from peacemaking to war-making.

The consideration of ethical challenges in military service in Frank Hasel’s essay (chapter 7) forms the hortatory heart of the book. Without stridency or recrimination, Hasel makes it clear that participation in war—especially if this involves combat, but even if it does not—makes it “very likely that a person will be forced to obey orders . . . for reasons that are not entirely good or that perhaps are even clearly out of harmony with God’s word” (153). This pressure becomes even graver when, as is often the case, patriotism is conflated with religion and military action is depicted as a defense of moral values, often by both sides in a conflict.

The approach of these essays reaches outside the traditional Seventh-day Adventist concerns regarding military service.


A final essay (chapter 8), by Andreas Bochmann, deals with the psychological consequences of involvement in military activity and how Christians can assist those who are recovering emotionally and mentally from their participation in war. This important issue has received insufficient attention in the past, particularly among Adventists, who seem to have felt that their noncombatant status somehow insulated them from some of the psychological trauma experienced by others. But in a world where war is all too common, we need to be prepared to help these victims of post-traumatic stress, whether within or outside our church.

There are two gaps that could be filled by further studies on this topic. One, directed inward to the Adventist readership, would be an essay on the views of Ellen G. White on the evils of war and the dangers of militarism, along with her counsels to Adventists on the subject of military service. A second, directed outward to the broader readership, would be a larger consideration of the just war theory since, as has been noted by others, the traditional principles of jus ad bellam and jus in bello would serve, in all cases, to reduce the violence of combat and, in many cases, to replace war with practical, nonviolent peacemaking.

Those who wish to pursue the issue further will benefit from the three bibliographies: the first, “Official Seventh-day Adventist Statements on Noncombatancy, War, and Peace” (201–204), the second, “Seventh-day Adventist Literature on Peace, War, and Military Service” (205–217), and the third, a “selected bibliography,” “Books Dealing With Peace, War, Military Service, and Nonviolence” (219–225). Just war perspectives are common in recent Christian history and have even begun to influence some twenty-first-century Seventh-day Adventists. The third reference above is understandably skewed toward pacifist and nonviolent perspectives.

Sexualized narratives in preaching: Insights for personal and professional growth

Religious News from Around the World