What myth? Haven’t we been reading and fretting over the slow death of the church for the last two decades? Have we not heard of the “graying of the church”? What about our consistent reliance on all the data that flowed from a well-known evangelical research company?

According to Glenn Stanton, the pending death of the Christian church is a myth—a huge myth. And it is not just Stanton who is attacking the myth. Other research scholars are saying it as well.

Stanton builds a solid case on the foundation of careful research from the Pew Research Center, the National Opinion Research Center at the University of Chicago, the Indiana/Harvard University study on religion in America, and many other research centers. This raises the question of how, for decades, have we been hearing about the demise of Christianity, yet the very opposite may be true? 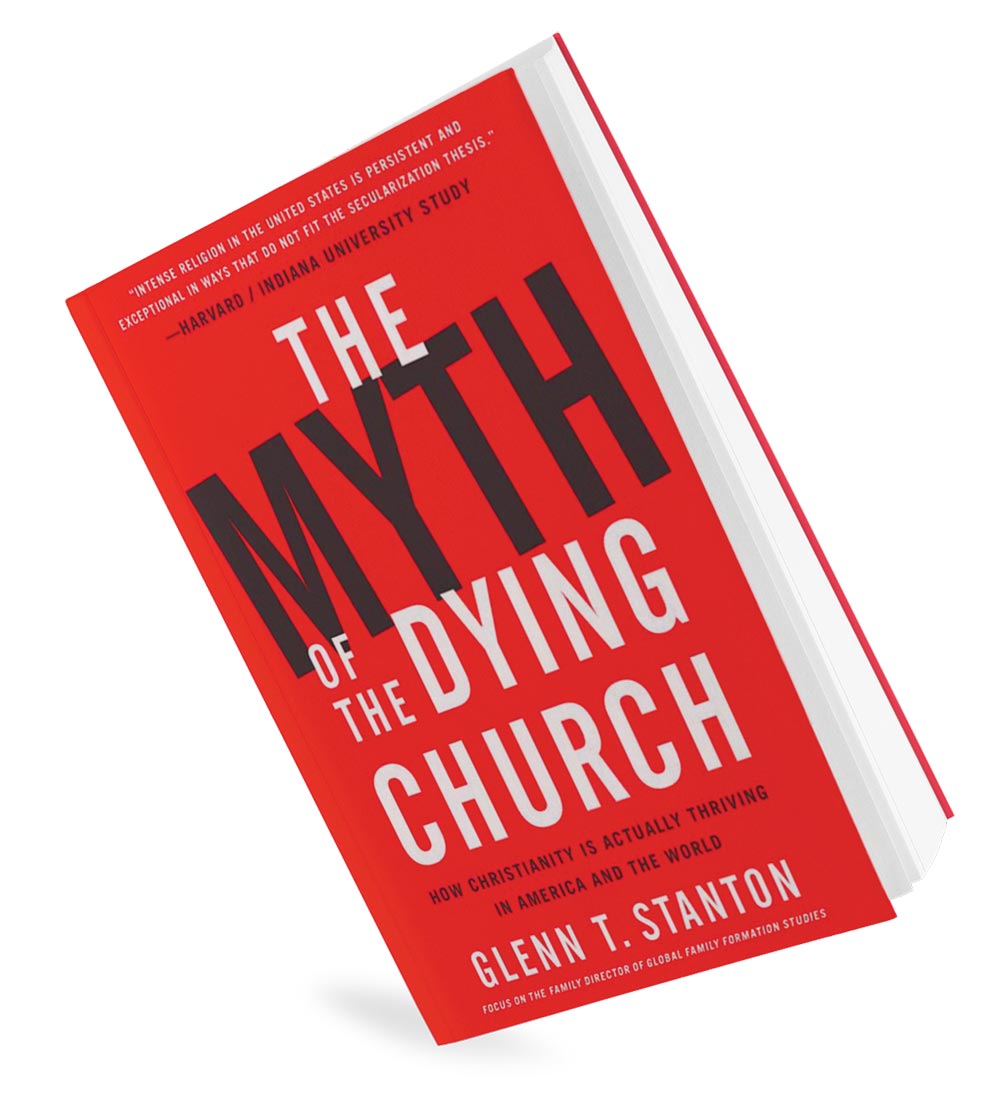 Stanton admits that there has been a serious decline in the mainline churches in America. Yet, he takes us deeper into research clearly indicating that evangelical, conservative churches are either steady, thriving, or in some cases, exploding in growth. It is the liberal mainline churches that have experienced a loss of five million members since 2007 and which are, according to Pew, in deep trouble. Many of the liberal Protestant churches have abandoned their founding tenets for a “more enlightened” view of truth and faith.

This is not the case, he explains, for those churches who still preach and believe in the traditional truths of Scripture. Those solid biblical churches—that have vibrant and meaningful worship, practice and demonstrate their life in Christ, and reach out to meet the needs of the community—are growing! The growth, Stanton points out, is particularly noticeable among nondenominational churches who hold to a conservative, traditional view of the Bible.

In spite of what we may have heard, young adults are moving over to this type of church that puts the demands of the gospel upon them. The research Stanton cites indicates that this is a growing trend. That should be good news for every pastor, parent, and church leader. Then how could we have all been so wrong for so long?

Perhaps, Stanton suggests, media writers only grasped the headlines and failed to peer deeper into the research they were citing. Perhaps secular media failed to distinguish (or understand) the difference between liberal Protestant churches and the conservative Evangelical churches. The evidence seems to indicate that Christianity is not dying after all, rather it is reformulating or being clarified, a process that has occurred several times in the last two thousand years.

The church is particularly growing in the global south (people living below the earth’s equator), where conservative, Bible-believing churches are doing especially well. Growth among such churches in Africa and South America is singled out for special note. But growth has also been explosive in China, where the government is trying to limit the spread of Christianity. Evidence from China indicates that the Christian faith is growing regardless of difficulties faced by believers there.

Stanton’s book should give hope to all of us who are deeply concerned about the future of the church. The evidence presented indicates that Christianity is actually thriving in America and the world. Yet Stanton is not blind to widespread stagnancy in the church and is brave enough to challenge commonly held assumptions on cultures that we cherish, customs that we crave, and traditions that we treasure. His challenges cannot be ignored.

Keeping our sense of the call

Knowing that God has called you replaces doubt and despair with healing and hope.

Jesus was concerned that we do not cause children to suffer. Take time to listen to their joys—and their pain.

Emotional hurt lurking in the pew

Authentic church growth necessitates vigilance regarding the emotional health of your congregation.

​Involve the church in your call