The coronavirus crisis has affected ministry in profound ways. Churches and ministries accustomed to functioning in predictable and stable environments now find themselves forced to adjust to new realities. A growing consensus is that the post-COVID-19 church will emerge significantly altered.

In addition, we have seen another crisis erupt all around the world, with people of every hue rising to support equality for all people. “Pictures and video show people in London, Toronto, Berlin and more holding signs that say ‘Black Lives Matter’ and chanting the same lines heard in cities across the United States. Though sparked by [George] Floyd’s death, the protests in these countries also focused on systemic issues of racism seen there.”1

A sense of helplessness has enveloped both crises, with the church crying out with Jehoshaphat, “O our God, . . . we have no power against this great multitude that is coming against us; nor do we know what to do, but our eyes are upon You”
(2 Chron. 20:12).2 I believe Peter’s example of addressing crises faced by the early church provides us with a strategy for responding to challenges posed by crises of all kinds.

The contextual background of Acts 12 presents a growing and dynamic church suffering relentless pursuit and merciless persecution from persons of authority. Herod Agrippa had executed the apostle James, to the delight of a Jewish establishment menaced by the growing influence of the Christian sect. From the slaughter of babes in Bethlehem to the beheading of John the Baptist, the Herodian dynasty seems to have had murder encoded in its genes. Political expediency now forges an alliance of convenience between Agrippa and the Jewish leadership, whose aim is to kill the apostle Peter.

Despite the schemes of man, Heaven dictates a stay of execution for Peter. An angel, no less, is commissioned to miraculously usher him out of prison. Following his deliverance, the apostle appears at Mary’s house, where the church has interceded for him. The fervent prayers of a righteous church availed much. Centuries later, the Puritan preacher Thomas Watson would declare, “The angel fetched Peter out of prison, but it was prayer that fetched the angel.”3

Initially, the believers deem his deliverance as too good to be true, but once inside, he unveils his strategy for surviving the crisis. A meticulous reading of Acts 12:17 reveals the steps of Peter’s management strategy for deliverance in a crisis.

“But motioning to them with his hand to keep silent . . .” (Acts 12:17). Peter was delivered, but he was still a fugitive. He knew his presence could place every individual in Mary’s house in jeopardy. He knew that joy can quickly turn to anxiety when authorities show up at your house.

One news anchor stated, “There are two major crises in this country tonight, two deadly viruses killing Americans: Covid-19 and racism.”4 The validity of both crises has been questioned by some. While theories of conspiracy abound, the political discourse continues to degenerate, with those of polar extremes living in alternate realities. Spiritual leadership must de-escalate the tension by asserting that God is still in control. He declares, “Be still, and know that I am God” (Ps. 46:10)!

Both crises have involved grief that has manifested itself in fear, blame, and anger. Scripture admonishes, “BE ANGRY [at sin—at immorality, at injustice, at ungodly behavior], YET DO NOT SIN” (Eph. 4:26, AMP). Ellen White acknowledges, “It is true there is an indignation that is justifiable, even in the followers of Christ. When they see that God is dishonored, and His service brought into disrepute, when they see the innocent oppressed, a righteous indignation stirs the soul. Such anger, born of sensitive morals, is not a sin.”5

In times of crisis, spiritual leadership must (1) validate anxiety and outrage, (2) calm tense environments, and (3) be as “the sons of Issachar who had understanding of the times, to know what Israel ought to do” (1 Chron. 12:32).

“He declared to them how the Lord had brought him out of the prison” (Acts 12:17). Rather than denying his bondage, Peter displayed it and testified to his divine deliverance. I see the believers being spellbound as Peter told them that an angel woke him up, told them that chains and handcuffs fell from him, and told them that closed doors opened for him. During a crisis, share your story. No one can argue about what God has done for you. 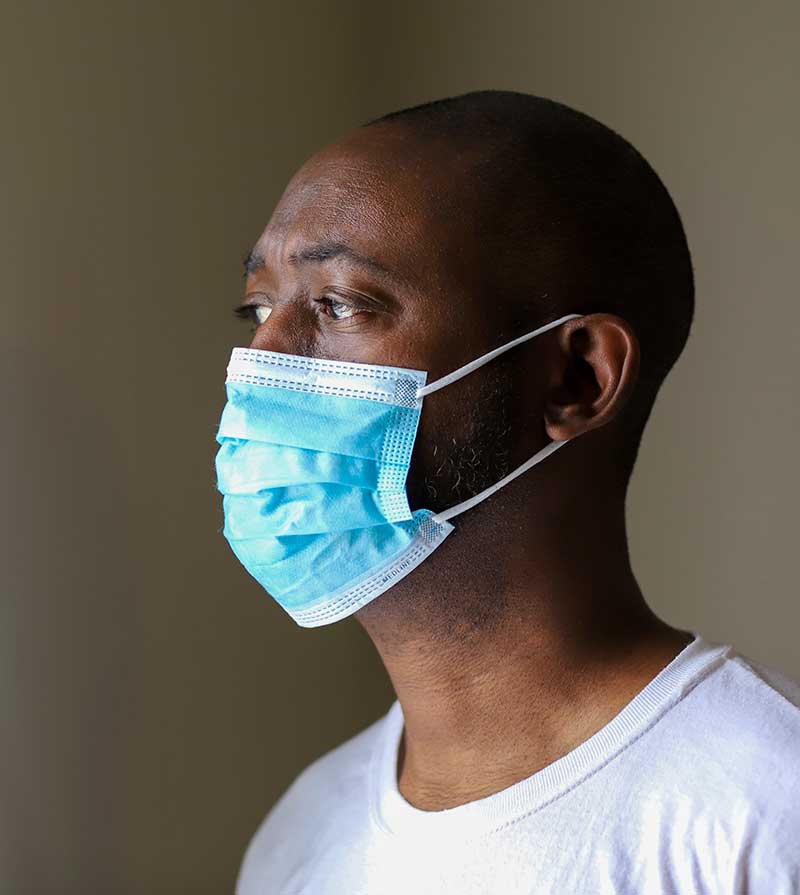 I heard from several individuals stating that my story helped them navigate their own struggle openly without shame.

It is wonderful when colleagues from the majority culture invite us to tell our story. Then necessary confrontation is accompanied by welcome collaboration. Organizational development consultant Kathy Obear recommends “a weekly check-in for people you manage or coworkers you are genuinely close to. It can be as simple as asking: ‘How are you doing? Given the pandemic, [given] the national uprisings going on—how are you personally impacted and how can we support you?’ ”6 Few will refute your testimony.

Telling your story also encourages the faith of others. In a public setting, I shared my personal struggle with COVID-19. I, along with two of my children, had been stricken with the virus. By the grace of God, we overcame our illness. By going public, I wanted to send a message that contracting the virus was not a cause for shame or stigma but rather an occasion for mutual support. I heard from several individuals stating that my story helped them navigate their own struggle openly without shame.

“And he said, ‘Go, tell these things to James and to the brethren’ ” (Acts 12:17). Peter asks that someone take the news of his deliverance to James and other church leaders. This particular James was the older brother of Jesus who would go on to write the New Testament epistle of James. The early church referred to him as James the Just. Many assume that Peter was the absolute leader of the primitive church. But the nominating committee made James the leader of the church in Jerusalem. He chaired the Jerusalem Council, with Peter in attendance (Acts 15).

Peter understood that, even in the midst of that specific crisis, the church of God has structure and discipline. As a result, he was intentional about working within its framework. Before departing Mary’s house, he submitted to duly established church authority by sending a message about his status to James. In essence, he was saying, “Go tell my pastor that I have been delivered.”

A leadership vacuum during a crisis may prompt some to act independently of and without accountability to the church body. “Followers of Jesus Christ will not act independently one of another. Our strength must be in God, and it must be husbanded, to be put forth in noble, concentrated action. It must not be wasted in meaningless movements.”7 In acknowledging James’s leadership, Peter demonstrated that he was no loose cannon and thus affirmed spiritual leadership.

“And to the brethren” highlights that we cannot survive without mentors, advocates, and allies. No one individual can defeat the virus of racism. Peter was not ashamed to reach out to the brethren. The brethren may live in a different place, operate on a different level, or be of a different color, but such partnerships are formidable. Patrick Lencioni comments, “Not finance. Not strategy. Not technology. It is teamwork that remains the ultimate competitive advantage, both because it is so powerful and so rare.”8 Times of crisis demand that we turn to each other, not on each other.

“And he departed and went to another place” (Acts 12:17). The ongoing persecution in Jerusalem made it impossible for Peter to continue ministering there. However, he did not give up ministry. Rather, he decided to do it elsewhere. Peter chose to remain occupied in God’s work in another sphere until it was safe to return. The crisis required a recalibration or reinvention of ministry.

Theologians disagree about where Peter went. Catholic tradition says that he preached to the Jewish Christian community in Rome. Another view is that, like Paul, Peter embarked on a missionary voyage to establish churches in unentered areas. His first epistle tends to support this view as it lists greetings to Christians in various cities in Greece (1 Pet. 1:1). His salutation appears as the words of a spiritual father writing to churches that he may have founded. The point remains that when the crisis made it impossible for him to function in Jerusalem, God opened doors for him to serve in other spheres.

COVID-19 has paralyzed traditional ministry and forced many to adapt to new realities. Resiliency requires adaptation and reinvention. Contrary to expectations, churches continue to thrive through a variety of changes ranging from remote services to online giving. Many individuals unable to work in their regular employment have found time to volunteer in humanitarian service.

In a time of economic uncertainty, fear of layoffs, or cuts in benefits, we have assured our workers that faithful labor to bring all the tithes into the storehouse will not go unrewarded. We asked every church to register for online giving and have adapted the way tithes get remitted to the conference. During weekly remote pastoral meetings, we provide financial updates. The shared report includes lists of congregations that are late, as a means of accountability. No pastor wants to see his or her church on the list. One would expect a precipitous drop in tithe in the epicenter of the pandemic, and yet God’s people have remained faithful to their covenant. They instinctively understand that He promises His faithfulness and protection to those who remain faithful to Him.

If contemporary crises have frustrated your vocational calling, don’t despair. If it’s creativity you need, pray and ask God for guidance in reinventing your ministry. Maybe He will inspire you to lead telephonic Bible study or conduct internet evangelism. He may ask you to don protective equipment and serve in a food pantry. If it’s forgiveness, love, or hope you need, cry out with the psalmist, “Deliver me from the workers of iniquity and save me from bloodthirsty men” (Ps. 59:2). God may whisper to you to organize a prayer vigil or a peaceful protest. Whatever it is, God still has a ministry avenue especially for you.

From crisis to victory

Peter’s response to a crisis mutually benefited him and the church. God’s cause strengthened as the early church continued to grow despite persecution. The apostle’s ministry prospered through expansion and recalibration. He went on to serve God’s church for several additional decades until his ultimate martyrdom. As we face crises never before witnessed in our lifetime, following Peter’s crisis-management strategy will expand our ministry and, from crises of global and catastrophic proportions, we will emerge victorious.

Songs in the night

Struggling to trust: Why I raised my Promise percentage

Four things to do before you decide to walk away

Managing conflict in the church

New Moon and Sabbath of Isaiah 66

Twelve ways to cherish your wife

PASTOR: Do's and Don'ts on Ushering

The holy ground of confinement

Songs in the night