New leadership for the Seventh-day Adventist Church in North America 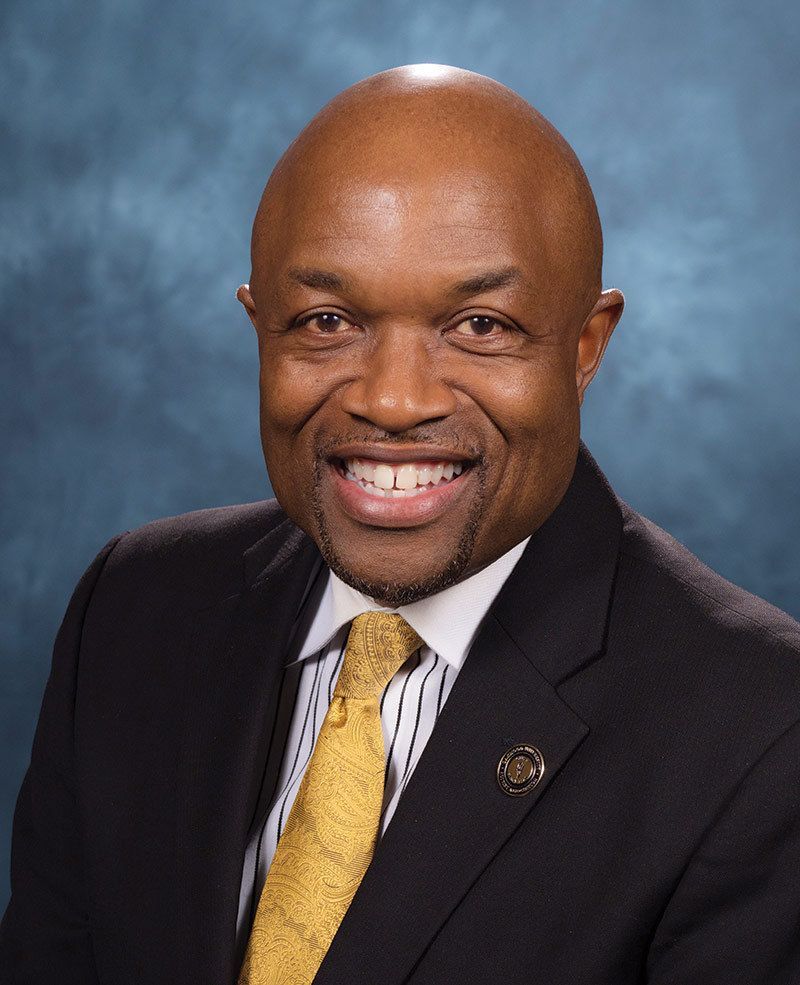 On July 9, 2020, the Seventh-day Adventist Church’s General Conference (GC) Executive Committee met virtually to receive the name of G. Alexander Bryant, the recommendation for division president, from both the North American Division’s (NAD) nominating committee and executive committee. Bryant was confirmed in a vote of 153 to 5.

“I am first indebted to God for His call to ministry and secondly to those who have poured into my life over the years,” said Bryant in response to the vote. “I am deeply humbled by the confidence Elder Wilson, our chair, and the NAD and GC executive committees have placed in me with this assignment. This task is too big for one individual or office.It is abundantly clear to me that it takes all of us working together to advance God’s kingdom, and I just deeply covet your prayers.”

While serving as the division’s secretary, Bryant’s passion for evangelism has led him to conduct annual evangelistic series throughout the United States and in Kenya, Zimbabwe, Ghana, Jamaica, South Korea, the Philippines, China, and Japan. He had lived in Japan, where he served the church as a student missionary.

In an earlier interview, Bryant was asked what a racially reconciled church would look like. “I’m not sure what it’ll look like, but I do have a good picture in my head of what it will feel like,” he stated. “It will feel like everyone’s accepted for who they are and what they are. I would like to feel that I’m accepted, not because of my color of my skin but in spite of what that color may be. I would like to feel that [whether] walking into a church, a conference office, a union office, a division office, or a General Conference office. If I could feel that I’m accepted, that I’m loved, and that I’m a part of God’s family because I belong to Him, I think we will achieve a lot.”

Bryant is married to the former Desiree Wimbish, who served as associate superintendent of Education for the Potomac Conference and superintendent of Education for the Central States Conference, as well as former principal of the V. Lindsay Seventh-day Adventist School in Kansas City, Kansas. Desiree currently serves as the assistant director and projects coordinator for Adventist Education in the NAD. The Bryants have three adult children and three grandchildren.

Bryant replaces Daniel R. Jackson, who served at the NAD headquarters since his election in June 2010 at the GC Session in Atlanta, Georgia, and reelection in 2015 in San Antonio, Texas, until his retirement on July 1, 2020. Jackson was passionate for the mission of the church to reach all people, using all people. His vision, combined with his encouraging support to employees, was always sweetened with laughter and song. He grew the mission and ministry of the division through building up the NAD Ministerial Association (Jackson’s wife Donna was an associate ministerial director with responsibility for clergy families), Multilingual Ministries, and Stewardship department; the creation of a missional strategic plan; the addition to the NAD territory of the Guam-Micronesia Mission, Oakwood University, Pacific Press Publishing Association, AdventSource, Christian Record Services for the Blind; and the relocation of the NAD into their own headquarters facility.

The search process for a new executive secretary has begun. [Adventist Review/Ministry] 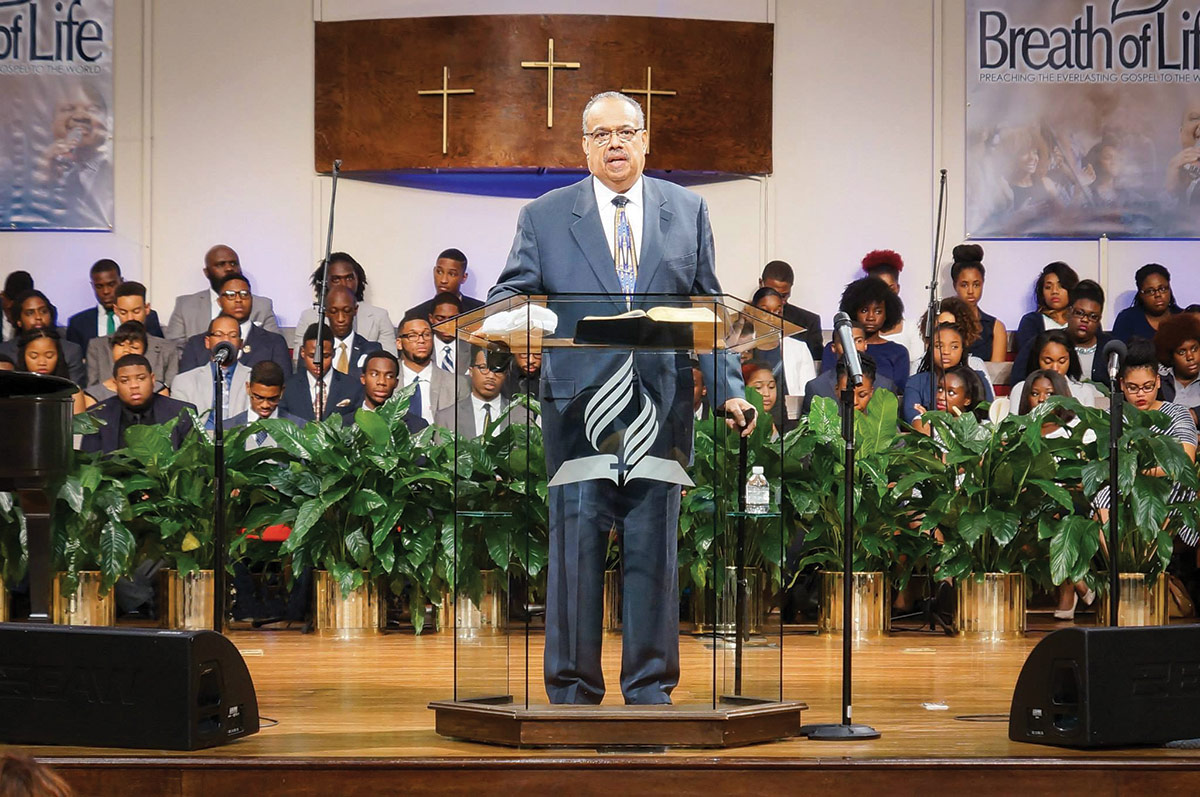 Walter L. Pearson Jr. passed to his rest on June 7, 2020, at the age of 74. He was a graduate of Pine Forge Academy and Oakwood University. His ministry encompassed Allegheny West, Allegheny East, and the South Atlantic Conferences. While serving as the senior pastor of the Berean Church, he was an executive board member for Mayor Maynard H. Jackson’s “Atlanta Religious Mobilization Against Crime.”

From there, he was called to the Ellen G. White Estate at the world headquarters of the Seventh-day Adventist Church, where he was the first African American to serve as an associate director. He was then invited to serve as director of evangelism and church growth in the General Conference Ministerial Association. Upon the recommendation of retiring Breath of Life Television Ministries speaker/director, C. D. Brooks, Pearson assumed this position, serving concurrently as the general field secretary for the North American Division of the Seventh-day Adventists.

Pearson led successful evangelistic meetings nationally as well as internationally in cities including Kingston, Jamaica; Tema, Ghana; Warsaw, Poland; Nairobi, Kenya; and London, England. He was invited to serve as the featured speaker for the North American Division’s Net 2004 evangelistic initiative, “Experience the Power.” This initiative was uplinked to approximately 1,100 sites in North America, with another 1,000 sites in the Caribbean and tens of thousands around the globe. As a result, over 4,000 individuals were baptized.

Pearson will be remembered as one of the Seventh-day Adventist Church’s most gifted preachers. His preaching gift was honed under the tutelage of Dr. H. L. Cleveland and the influence of certain extraordinary preachers in the local ministerial alliance. He possessed the ability to make the Word of God come alive in the minds of his audiences. In 1991, he became the first Seventh-day Adventist inducted into the Martin Luther King Jr. Board of Preachers and Collegium of Scholars at Morehouse College in Atlanta. For 12 years, he served as the speaker/director of Breath of Life Television Ministries before passing the baton to the current speaker/director Carlton P. Byrd. Byrd said Pearson was “one of our greatest communicators, particularly in his narrative preaching and ability to tell a story.”

Jerry Page, ministerial director for the General Conference, stated, “He was a true preacher of the Word with integrity, clarity, and the convicting and converting power of His indwelling Friend, the Holy Spirit!” Retired North American Division (NAD) president Daniel R. Jackson said, “While his powerful messages had been carefully thought through, they were delivered with ‘Spirit power.’ Thousands will be in God’s eternal kingdom who will trace their experience back to Walter Pearson.” NAD vice president Alvin M. Kibble said, “Pearson preached with the fervor of the old-time evangelists and the eloquence of a master wordsmith. His timing, style, and humor were artfully and effectively crafted to deliver the message God had ordained. A careful student of the Word and of human nature, his sermons were biblically sound and socially relevant.”

G. Alexander Bryant, the new NAD president, called him “one of the most gifted homileticians of our day.” Doug Batchelor, president of Amazing Facts International, said, “He was a gifted communicator and evangelist who will have many stars in his crown.” Pearson leaves to mourn him his wife Patricia and other family members including his children Ericca, Walter III, and Mia-Liani, and four grandchildren. Page stated, “Those of us in the General Conference Ministerial Association share in the mourning and sorrow of loss, yet the amazing joy of that certain future resurrection morning when all the faithful of Walter’s family and loved ones will be reunited with him again!” [Breath of Life/NAD/Ministry]

While we will endeavor to keep the “unity of the Spirit” in the bonds of peace, we will not with pen or voice cease to protest against bigotry. —Ellen G. White, Last Day Events, 48.

We the members of the Seventh-day Adventist Regional Presidents Council share the shock, sorrow and anger that our colleague, Elder Roger Bernard, President, Central States Conference so articulately described. . . .

“Dr. Martin Luther King said that ‘Injustice anywhere is a threat to justice everywhere.’ No one—in particular, people of faith—can be indifferent or silent when injustices are done and the precious gift of life is needlessly snatched away.

“We call on government leaders on all levels to act and put an end to this continuing sad story of unequal justice under the law and we support the peaceful protests and demonstrations that call for it.

“Our prayers go out to the family of George Floyd, to our country and for the world that we are called to serve and prepare for the soon coming of the One whose coming will ultimately make all wrongs right.

The General Conference of Seventh-day Adventists

In this time of pain and unrest across the United States, our hearts continue to go out in sympathy to all who have suffered, and especially to the families of Ahmaud Arbery, Breonna Taylor, and George Floyd, whose lives ended tragically.

“As Seventh-day Adventists, we stand together worldwide in condemning racism, bigotry, hatred, prejudice, and violence in all of its myriad forms. We know that God is a God of justice, who sees and knows all, and we look to Him to fulfill His Word when He says, ‘Vengeance is Mine, I will repay’ (Romans 12:19).

“On behalf of the Seventh-day Adventist worldwide family, I have sent letters of condolence to the families of Ahmaud Arbery, Breonna Taylor, and George Floyd, expressing our sorrow for the tragic loss of their loved ones and stating unequivocally that as Seventh-day Adventists we stand strongly on the biblical principles that go against hatred, rage, racism, bigotry, evil surmising, prejudice, and more, and offered the families support, hope, and encouragement through God’s Church. . . .

“I encourage you, too, as a Seventh-day Adventist, to reach out to these and other individuals within your local community, bringing, in a practical way, the peace, comfort, hope and courage that only Christ can provide as we follow His example in ministry outlined in Luke 4:18.”2

The evangelism diamond: A model for successful evangelism

Sacrificing for God’s cause

Typology and the Levitical system—1