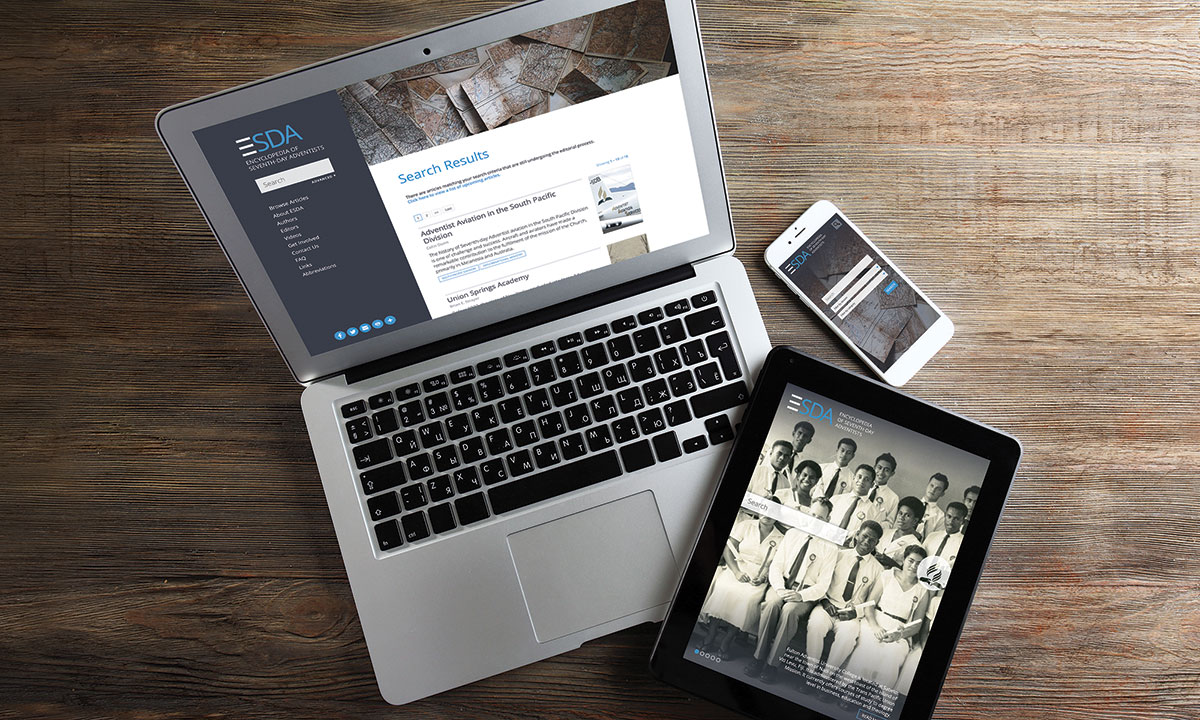 “Today [July 1, 2020] is a historic day in the history of the church,” says Artur Stele, vice president of the Seventh-day Adventist Church. “Today we witness a moment Adventist scholars have been waiting to see for over 40 years. The significance of this new reality cannot be overstated.”

It all started in 2014, when General Conference administrators realized it had been decades since the printed Seventh-day Adventist Encyclopedia had been updated. Originally published in the 1960s, the in-depth book had been updated in the 70s and again in the mid-90s. As a result, the encyclopedia didn’t reflect the growth and development of the church over the past 25 years.

“I believe the Bible has very specific historical information, which has been shown by archaeology to be accurate,” points out Ted Wilson, president of the Adventist world church. “It gives us a picture of why history is so important.”

“For some people, the word ‘encyclopedia’ can be quite intimidating,” says Dragoslava Santrac, managing editor for the new Encyclopedia. “It sounds scholarly and advanced, and full of dry information. With this version of ESDA, we had in mind the everyday person who wants to learn more about Adventists and Adventism.”

“I’m feeling both relief and elation at reaching this milestone,” says David Trim, director of the Archives, Statistics, and Research Department for the Adventist church, and overall editor of the Encyclopedia of Seventh-day Adventistsproject. “We want church members to be inspired by the stories of how God has led and the incredible commitment and sacrifice of many men and women who built up this church around the world,” says Trim.

The ESDA isn’t just for Adventists, however; both Santrac and Trim feel strongly that the encyclopedia could be a powerful and insightful resource for those not yet familiar with the church. “They will find truthfulness and honesty, and they will find extraordinary men and women who were completely committed to God and the mission of the church,” Trim says.

G. Alexander Bryant, president of the North American Division, points out the importance of the ESDA to understanding a lesser known part of the church’s history: the contribution of the African American community to the church’s development. “This is a very important thing for Adventists to understand today,” Bryant says. “This encyclopedia will help share this important and vital part of our past.”

Erton Kohler, president of the South American Division, sums up the resulting benefits of the Encyclopedia perfectly: “This resource can be used for not only inspiring sermons and seminars for the church, but in helping church members learn how pioneers overcame challenges and crises similar to those we face today.” [Adventist News Network]

Faith leaders, government officials, and activists advocated for prayer, social justice, and community empowerment through a virtual freedom ride in response to the national outcry over the death of George Floyd by law enforcement. From June 14 to 21, 2020, “Miles to Minneapolis” took viewers on Facebook and YouTube on the virtual journey from the east coast to the Midwest. The “stops” included Columbia, Maryland; Pittsburgh, Pennsylvania; Cleveland and Columbus, Ohio; Detroit, Michigan; Chicago, Illinois; and Minneapolis, Minnesota, where Floyd was killed.

“There is a problem in this land, and that problem is systemic racism. There is no intellectual construct that’ll help us understand how that happened,” said Daniel R. Jackson, retired NAD president, speaking of Floyd’s death. “I’m a strong believer that in order to make lasting change, communities must pull together, regardless of race and faith.”

Each of the Miles to Minneapolis originators—Yolanda Banfield, Rockefeller Twyman, and Bill Ellis, assisted by the Emmanuel-Brinklow church pastor, Anthony Medley—expressed how the event enthusiasm, sincerity, and participation of the faith and community leaders from every location of all ages inspired them and gave hope for the future.

“What excited me about each stop was the willingness of the interfaith leaders to collectively lend a voice to the current movement led by young people,” said Banfield. “This is truly the Joshua generation. This time is bringing out the youth. They are taking the lead and asking questions. To hear and see the support and engagement of this interracial, multigenerational, and interfaith movement makes me so excited.”

“It’s great to have a cause, but it’s important to keep your heart clean, pure, and forgiving. If you don’t, you’ll get caught up in the hatred and madness of society,” said Banfield. “We have to stay connected to the God of love and peace.” [Mylon Medley, NAD News]

The pew talks back to the pulpit:

Thoughts on the church service

Do you live with a mindset of scarcity or abundance?

Stewards of this gift

Building a culture of liberality in the local church

Teaching, preaching, and healing in the Gospel of Mark

Our high calling: Teaching, preaching, and healing in the Gospel of Mark