In a live-streamed event on July 3 and 4, 2020, the Seventh-day Adventist Church unveiled its strategic focus for 2020–2025, entitled Reach the World: I Will Go.

Initially set to launch at the 2020 General Conference Session in Indianapolis, plans for presenting the initiative to the world church had to be adjusted due to the COVID-19 coronavirus pandemic. Adventist Church president Ted N. C. Wilson said that, through this focus, church leaders hope to see “a worldwide, massive involvement of all our church members in their evangelistic and witnessing commitment during these last days of earth’s history.”

I Will Go, according to the plan’s website (iwillgo2020.org), is “a tool to help the church be more focused and effective in performing critical tasks. This strategic plan is rooted in the Great Commission found in Matthew 28, which calls Jesus’ followers to ‘go and make disciples of all nations’ (v. 19, NIV).” The planning committee was chaired by Michael Ryan, assistant to the president of the General Conference, in consultation with divisions of the world church. The plan’s name came from River Plate Adventist University in Argentina. Staff and students at the university were thrilled for the world church to use the name of its mission program, as well as its program’s student-designed logo.

According to the Office of Archives, Statistics, and Research director David Trim, almost unprecedented research from all 13 world divisions informed the direction for this new initiative, including “The Adventist Pastor: A World Survey,” conducted by Roger Dudley and Petr Cincala of the Institute of Church Ministry at Andrews University.

Research efforts will continue through the next five years to evaluate the plan’s effectiveness and inform the focus for the next quinquennium. [Adventist News Network] 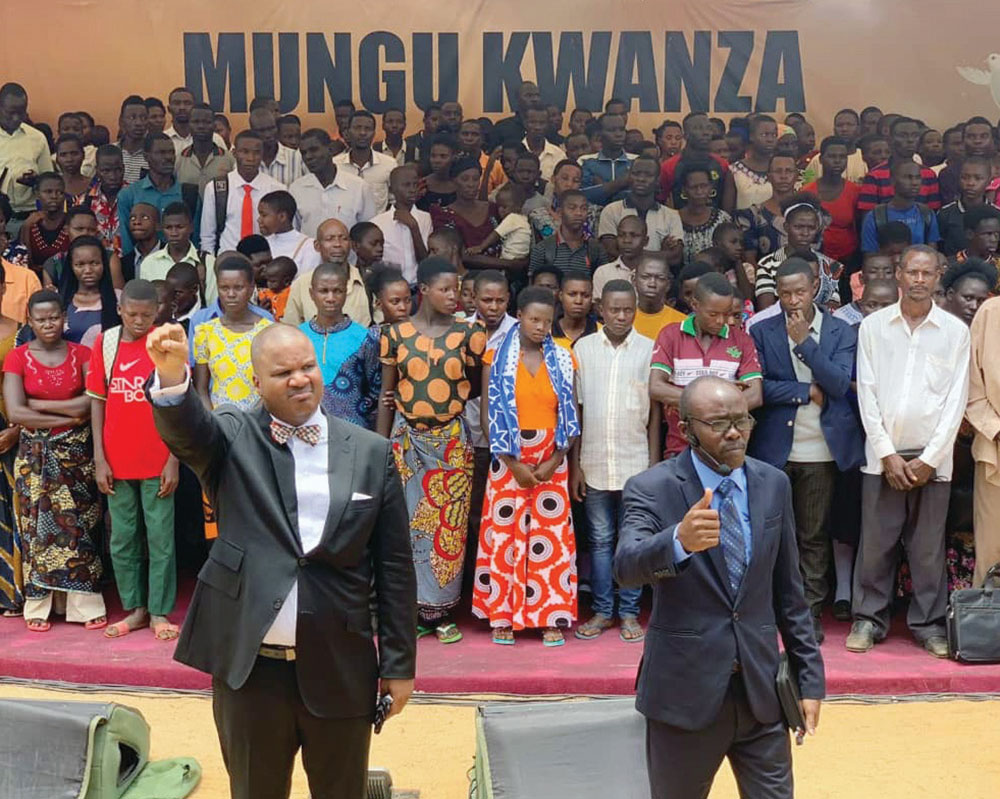 Historic baptism in Breath of Life evangelistic campaign in Tanzania

The Seventh-day Adventist Church in Tanzania gained 16,706 new believers after a revival conducted by Carlton Byrd, speaker/director of the Breath of Life television ministry, the largest baptism in the ministry’s history.

“This revival is another testament to God’s miraculous power!” remarked Byrd. “The Spirit of God knows no limits and reaches far beyond our ability and imagination. This revival far exceeded what I could’ve ever imagined was possible. I am very grateful for what God has done.”

In the week leading up to the revival, a health clinic provided free health services to more than two thousand in Chato and surrounding areas. At the first baptism of 256 persons in Chato, anxious new believers walked to the lake, home to many crocodiles. Safety nets were placed in the water with lookouts stationed alongside. Undeterred by the danger, the new believers were baptized. Utilizing the Swahili theme “Mungu Kwanza,” meaning “God First,” evangelist Byrd admonished listeners that when God is first, nothing is impossible. The twentieth Breath of Life Seventh-day Adventist church in the world was organized, the first Breath of Life church on the continent of Africa, to be constructed by Global Vessels Inc., based in Huntsville, Alabama, United States.

Success was due to the efforts of the North Tanzania Union Conference, the South Tanzania Union Mission, the Association of Tanzanian Adventist Professionals and Entrepreneurs, and the Tanzanian Adventists in the United States (TAUS). Michael Mwasumbi, president of TAUS, enthused, “The fact that this was done in a small town proves that technology works. It also shows that the people are ready and willing to respond to the Word. . . . I’ve never seen anything like this before.” [NAD News/Regional Voice]

In April and May 2020, Robert Costa, associate ministerial secretary of the General Conference of Seventh-day Adventists and speaker/director for the It Is Written Spanish ministry Escrito Está, held eight different one-week, online evangelistic reaping series aired in over 16 million homes. Filming from his living room using his computer, a lapel mic, an iPhone, two lights, and a Bible, Costa spoke nightly to people in Chile, Ecuador, Mexico, and Guatemala, who viewed the program on YouTube, Facebook, and the Escrito Está website. The series was also viewed in other countries of Central America, South America, and North America, as well as in Western Europe.

Most meetings opened with a 5-to-10-minute health topic, with translation into sign language. Prayer was an essential part of these meetings’ success. In one area, more than 80,000 members prayed 24/7 for two weeks. In another area, six church groups joined forces, and almost one million members invited their friends to the meetings. Church members were motivated to reach their friends even if they could only connect with them by phone. As a result, more than 1,500 were baptized, with thousands waiting to be baptized when churches open. [NAD News/It Is Written]

What the church needs to effectively evangelize the world

Out of the blocks! Inter-American Division responds to strategic plan

True or false—Giving is better than getting

Demographics and the future of the church

Perfection in the Human Sphere

​Contours of European Adventism: Issues in the History of the Denomination on the Old Continent edited by Stefan Höschele and Chigemezi N. Wogu (Möckern-Friedensau: Institute of Adventist Studies, Friedensau Adventist University, 2020).