My personal battles with anger, grief, and doubt, along with both valuable and even not-so-helpful advice from friends and counselors during desperate times, motivated me to find a way to hear God speak even while navigating the shadows. Particularly in my own situations of loss—including a crumbling family in childhood, miscarriage in the first trimester of pregnancy after a decade of infertility, and long-term income decline through job loss—I have found resolution, comfort, and an affirmation of my faith through the Psalter.

As with no other portion of Scripture, the book of Psalms has shaped the world’s understanding of the character of a God who “is present even when He seems absent, who saves when all is lost, and who provides when necessity arises.”1 Within the context of Christian counseling, open expression can be a positive and effective method for providing psychological relief to those dealing with anxiety, broken relationships, depression, and mental illnesses among other difficult situations.

Through authentic and honest examples of the psalmists crying out to and questioning God while also reiterating His power and promises, believers see the benefits of giving a “voice” to their debilitating thoughts, emotions, and reactions within the context of scriptural insights. Bringing to light God’s responses to such pleas steers both hurting souls and spiritual counselors onto a wise path. With a healthy alternative for processing and then releasing inner conflicts, many can again find balance along with a deeper understanding of a heavenly Father and a strengthened relationship with Him.

The Psalter offers tangible examples of people who faced dark emotional trials, and their stories shed light on how to weather and overcome similar challenges in our modern age. The author of at least half of the psalms, the shepherd-turned-king David faced a breadth and depth of events during his lifetime that ranged from the pit of agony to the pinnacle of joy, equipping him “to sing the sweetest and saddest songs of the human soul in its thirst for God.”2 Within the book’s 150 lyrics, readers today can find scriptural tools to help them find resolution, comfort, and assurance when they suffer anger, grief, and doubt.

During His time on earth, Jesus Himself quoted from the psalms more than any other book of the Old Testament.3 The poems were ingrained in all aspects of His life and death, and the well-known verses were one avenue through which He spoke truth, confirmed prophecy, faced temptation, voiced questions to His Father, and found comfort.4

Masterful expressions of “misery, hurt, and agony” provide a starting place for rehabilitation and restoration by “defining the experience of suffering” for the one in pain.5

The language of Psalm 23 depicts the God of the universe not only comforting but also accompanying David in the valley of the shadow of death. It is imperative to note that consolation comes “only after much grief and loss.” Even when a strong faith follows someone down into the unexpected pit of pain, the shock of loss may, at first, render that person unable to hear any voice—including God’s. There are no words that do not ring superficial in those early moments.6

Rather than “whitewashing” the anguish of suffering, God’s people cry out, weep, and wrestle. Just as today, the process back then was disjointed. Yet, while not masking their feelings, the authors also did not betray God in suggesting that He does not exist in the valleys.7

The Psalter clearly expresses anger, being “full of imprecatory fury,” “a bloody plea for God to destroy an enemy, a howl of indignation demanding that evil suffer.”8 At the same time, God’s reactions to these heated expressions from His people are often surprising, and the victims’ paths take unexpected turns. A cathartic outlet is a necessary first step in the process of resolution when someone faces angering circumstances. Venting shock and confusion is a positive sign that a person understands the wrong done not only to themselves but also to God.

After catharsis, the moment of being still first escalates pain by forcing the realization that vindication is not imminent and may never happen in the victim’s lifetime. The person comes face-to-face with the fact that their only action is to depend on God. As an individual now “grieves and struggles with God,” they probe what He is doing, if they understand Him, and what their fury reveals about themselves. During such a mental battle, “the righteous heart waits for God to reveal His character.”9

Imprecatory emotions often dangerously morph into chronic rage and personal vendettas that leave people exactly where they began. Thus, God’s will takes a back seat to personal expectations as the progression of “therapeutically moving from acknowledgment to release” comes to a halt.10

One pastoral counselor recalls a client who held on to anger at her parents for years until the unresolved wounds and emotions began to manifest as unexplained rage at her spouse and other family members. Along with the minister’s help, Psalm 15 was instrumental in finding the words to voice her pain and uncover the source. Once she was able to “own her anger,” resolution and acceptance soon followed.11

At the center of the Psalter, the wisdom in the middle of imprecatory Psalm 73 points all cursing and painful questions to “the sanctuary of God” (v. 17),12 offering upright judgment at the perfect time. Only in His presence can God’s people find experiential understanding and resolution that overcomes the anger of a crisis of faith.13

Data confirms the correlation between personal health and well-being and active faith.

Donald Capps echoes the effectiveness of the psalms as engaging with “deep conflicting feelings of resentment, anxiety, envy, anger, and despair, on the one hand, and gratitude, serenity, confidence, and joy on the other.” He cites the Bible as a “ ‘means of stimulating and generating the necessary psychic energy’ to enable one to ‘accept responsibility for doing the thing’ that is ‘necessary and inevitable’ for one’s own ‘salvation and healing.’ ”15

Thomas Merton penned in his diary, “This is the secret of the Psalms. Our identity is hidden in them. In them we find ourselves, and God. In these fragments He has revealed not only Himself to us but ourselves in Him.”16

One pastoral team included portions of the Psalter among the multisensory spiritual tools used to enhance hospital visits. They offered receptive patients a paper containing a brief quotation (examples came from Psalms 23; 90; 118; 121; and 126). After reading it aloud, they invited the individual to keep the printed slip. Many “often gratefully hold on to the page of psalm verse or tuck it [under their pillows or] away in a special place.” 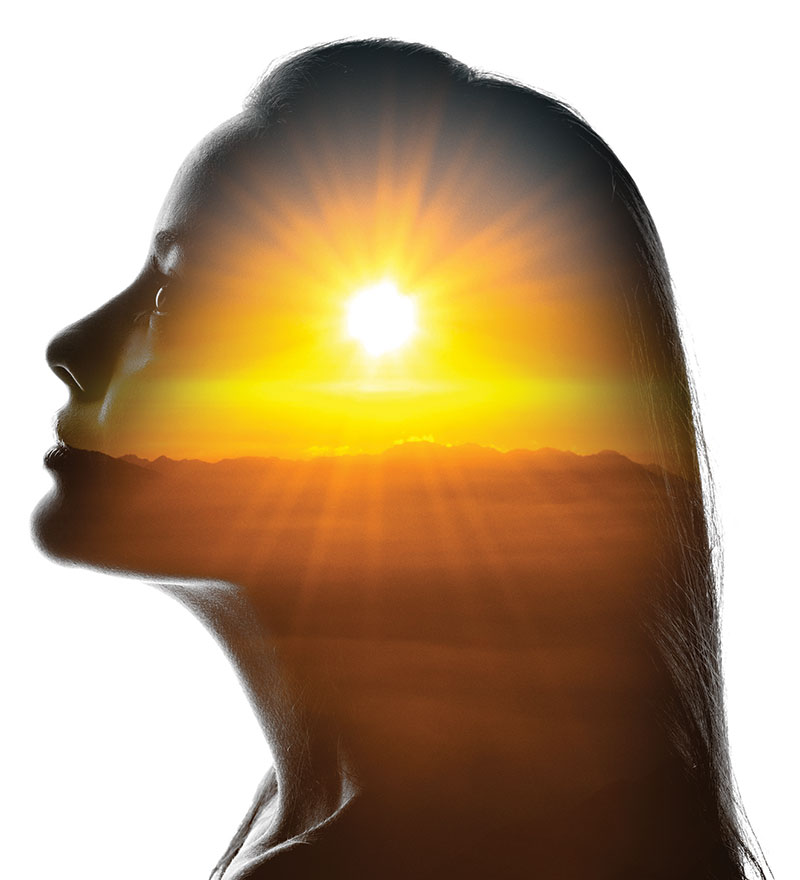 Patients could relate the passage to their own struggles. The simple but evocative language of the songs of lament spans cultural and religious boundaries to resonate with hurting people. In addition to expressing “enthusiastic gratitude,” most “stated that they were touched,” and “it gave them more hope” or made them feel “less alone,” and some requested future visits.17

Carrie Doering touches on the “theological naïveté” of ministers who offer such explanations to their congregations as “God does not give them more than they can bear, this suffering is their cross to bear, or that suffering is an opportunity to find Jesus and be saved.”18

When I reflect on times of doubt in my own life, I realize that such platitudes only deepened my desperation. Already overwhelmed, my first instinct was to give up on God as I clearly was not meeting His standard as presented by His representatives. Today my thoughts are in line with Eric Johnson and Stanton Jones’s caution that reservoirs of faith and church can be “exhausted or insufficient” at times, requiring supplemental resources “from scientific and professional psychology.”19

Scholars agree that psalms expressing sorrow and troubles follow a pattern that “switch[es] from lament or complaint to praise. . . . Praise, or the promise of praise, is considered to be a valid part of the complaint song.”20 Repeatedly, they demonstrate the practice of using times of tribulation as a platform for thanksgiving. Psalm 54 vocalizes this transition from the fear surrounding the expression “save me” to the acclaim that “He has delivered me out of all trouble;” Psalm 62 advises “trust in Him at all times” alongside “pour out your heart before Him” (v. 8).

At times, the psalmists’ lyrical gratitude salutes past experiences of healing or triumph over foes, and the poetic equality of Psalm 30 reminds us that “weeping may endure for a night, but joy comes in the morning” (v. 5). As a young boy, David penned six verses of trust and affirmation as an opening for Psalm 27 before sharing his lament and coming full circle to conclude the song with thanks. Could it be that “praise can and maybe should precede pleas,”21 a way of keeping blessings and troubles in perspective?

Despite 20 years and two birthed children since my miscarriage, the pain of that loss still brings tears to my eyes. But my hope is anchored in Psalm 139:16, which affirms the pervasiveness of God’s ways that transcend the sin of our world: “Your eyes saw my substance, / being yet unformed. / And in Your book they all were written, / the days fashioned for me, / when as yet there were none of them.”

I hear God speak to me through David, recognizing the tiny lost life and giving that precious child value and a future. The turning point in my darkest hour was a realization that restoration would come, even though I did not know the exact form. Still, I cannot help but imagine Jesus gently placing a newborn in my arms as I enter the gates of heaven while He whispers, “Thank you for believing that I would make this right and not letting go of Me.” Holding on to that hope became my comfort and, ultimately, my salvation.

The experiences, conversations, and divine perspectives found within the book of Psalms can play a powerful role in Christian counseling by effectively guiding and supporting the transition of suffering believers from anger to resolution, from grief to comfort, and from doubt to trust in God, even if the exact science of the transformative process remains unexplained.

Practical aspects of the proclamation of the three angels’ messages