A. Jane Sabes, PhD, is a former principal of Newbold College of Higher Education, Bracknell, England. She is a certified chaplain residing in Oklahoma, United States.

In his inaugural speech on January 20, 1989, US president George Bush set forth an ideal for humankind: “To make kinder the face of the nation and gentler the face of the world.” Yet today, we hear of unprovoked hostility toward Asians and Blacks. We hear of anti-Semitic attacks on Jewish synagogues, homes, and businesses. We hear of domestic terrorism targeting schools, shops, and cinemas. Societies are violently divided over who should lead their countries, and heated debates swirl around immigration—whether to open wide the door to those in desperate political and economic situations or build an impenetrable wall, impossible to breach.

I have recently begun asking myself, What is the source, the beginning, of this “us versus them” thinking? True, 2 Timothy 3:1–5 predicts: “There will be terrible times in the last days. People will be lovers of themselves, lovers of money, boastful, proud, abusive, disobedient to their parents, ungrateful, unholy, without love, unforgiving, slanderous, without self-control, brutal, not lovers of the good, treacherous, rash, conceited, lovers of pleasure rather than lovers of God—having a form of godliness but denying its power.”1 But I have also come to believe that labeling an individual or a group that is different from ourselves reduces our humanity. Permit me to employ just one example where we, as followers of Christ, may be contributing to the less-than-human reactions of today.

How do you and I refer to individuals who have not yet encountered that loving relationship with the Lord that we so thoroughly enjoy? Don’t we label them unbelievers, sinners, the lost, Gentiles, infidels, and the worldly? Yet the Bible peels back those damaging labels by introducing us to multiple “unbelievers” to whom we, God’s followers, owe a debt of gratitude.

Second Chronicles 9 relates the story of the queen of Sheba traveling a great distance to confirm the many amazing reports she has received regarding Israel. She finds a vibrant, healthy citizenry as a result of their faithfully following the principles set forth by their God. She is equally impressed by these highly educated people, with twelve tribes who cooperate rather than conflict among themselves. She meets a king who holds the happiness of the people in higher regard than building up his own wealth and ease. She observes reverent and holy worship services to their God, which is absent of the immoral debauchery associated with foreign gods. After months of study, observations, and interviews, this foreign queen, who had not previously been introduced to God, declares, “ ‘Praise be to the LORD your God, who has delighted in you and placed you on his throne as king to rule for the LORD your God’ ” (v. 8). Now, one would naturally expect such praise from a believer but not from an unbeliever.

We find similar declarations of God’s greatness repeated three times by another world leader: King Nebuchadnezzar. In Daniel 2, the king extols Daniel’s God for having given Daniel the insight to interpret the king’s dream when the wise men of the kingdom failed to do so. “The king said to Daniel, ‘Surely your God is the God of gods and the Lord of kings and a revealer of mysteries’ ” (v. 47). In Daniel 3, we find King Nebuchadnezzar angry with three young Hebrews who refuse to bow down to a golden image constructed by the king in his own image. He mandates them to a blazing hot furnace but is amazed when they appear untouched by the flames. Calling them from the furnace, the king declares, “ ‘Praise be to the God of Shadrach, Meshach and Abednego, who has sent his angel and rescued his servants! They trusted in him and defied the king’s command and were willing to give up their lives rather than serve or worship any god except their own God. Therefore I decree that the people of any nation or language who say anything against the God of Shadrach, Meshach and Abednego be cut into pieces and their houses be turned into piles of rubble, for no other god can save in this way’ ” (vv. 28, 29). Finally, having had a personal encounter with the God of heaven and been convinced, King Nebuchadnezzar makes this emphatic declaration in Daniel 4:34: “I, Nebuchadnezzar, raised my eyes toward heaven, and my sanity was restored. Then I praised the Most High; I honored and glorified him who lives forever.” The queen from Sheba and King Nebuchadnezzar of Babylon were both considered to be unbelievers yet drew attention to the greatness and glory of God. 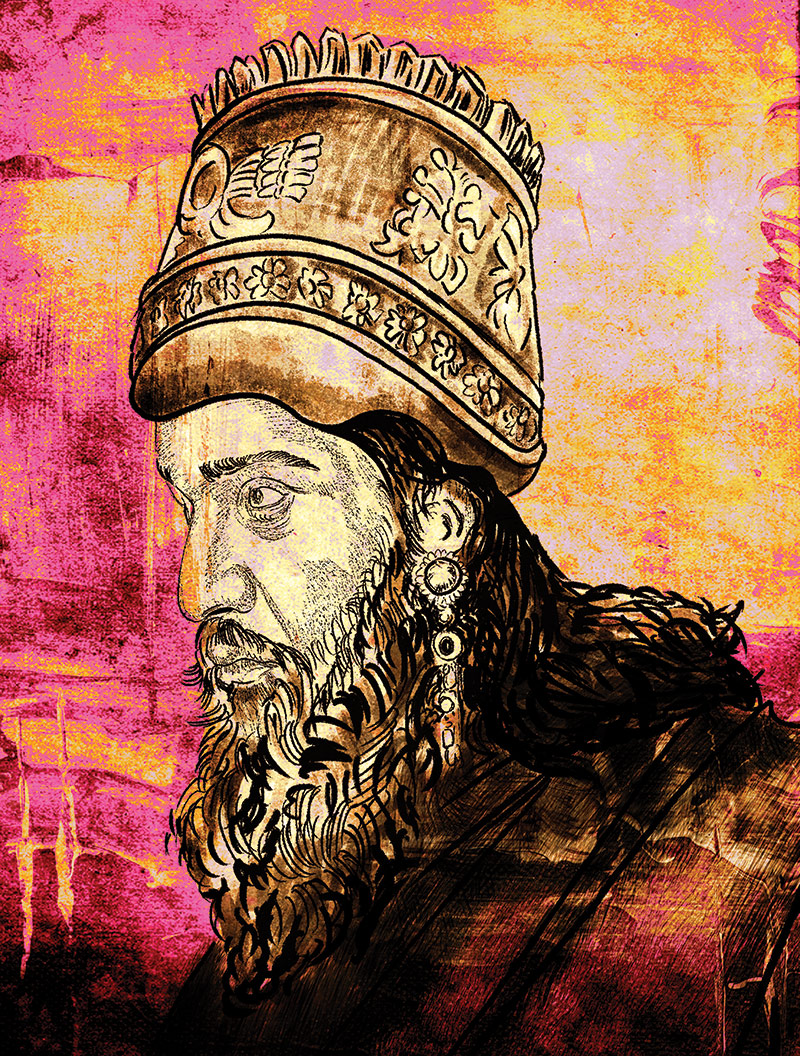 We find another world leader, King Artaxerxes, not extolling God but rather rendering service to God’s people. The story is recorded in Nehemiah 2. Jerusalem was in rubble. Nehemiah, a trusted member of the palace staff, explains to the king how Jerusalem, the sacred city of God, needed to be restored, and no one was stepping forward to undertake the massive project. A discussion ensues, and the king grants Nehemiah a leave of absence so that he can kick-start Jerusalem’s restoration. The king not only grants Nehemiah an extended leave of absence but also offers timber from his personal forest for the reconstruction effort, a military escort, and letters to the leaders of foreign nations through which Nehemiah must pass to reach his destination.

But is this responsibility of guarding God’s work left to the rich and powerful? Consider Elijah being instructed to seek housing from a Gentile, the widow of Zarephath. The prophet was escaping those angered by his prayer to seal up heaven’s rains until the nation came to conviction of their sins and turned from their destructive and offensive ways. While the story is recorded in 1 Kings 17:9–16, the very best summary of the story is offered by Christ in Luke 4:25, 26. Jesus said to the crowd, “ ‘There were many widows in Israel in Elijah’s time, when the sky was shut for three and a half years and there was a severe famine throughout the land. Yet Elijah was not sent to any of them.’ ”

We cannot forget Rahab, a prostitute by trade, who provided physical protection to the Israelites coming to assess Jericho’s military weak points prior to attacking. Not only did this “lady of the night” shelter the two men, but she advised them how to leave the city undetected and, further, sent them off with this most heartening message: “Before the spies lay down for the night, she went up on the roof and said to them, ‘I know that the LORD has given this land to you and that a great fear of you has fallen on us, so that all who live in this country are melting in fear because of you. We have heard how the LORD dried up the water of the Red Sea for you when you came out of Egypt, and what you did to Sihon and Og, the two kings of the Amorites east of the Jordan, whom you completely destroyed.

“ ‘When we heard of it, our hearts melted and everyone’s courage failed because of you, for the LORD your God is God in heaven above and on the earth below’ ” (Josh. 2:8–11).

Another individual whom one might not think to include in this grouping of idol worshipers who nonetheless assumed a vital part of God’s plan to save people and nations is Potiphar. This captain of the guard purchased Joseph from the Ishmaelites and took the 17-year-old youth into his home. During the years that Joseph served in this household, Potiphar taught the lad the Egyptian language, customs, and culture. And due to Potiphar’s governmental position, Joseph was afforded multiple occasions to meet other high-ranking officials. And, of course, Scripture informs us that this young slave became so trusted that he was given ever-increasing administrative responsibilities, all of which would prepare Joseph to someday comfortably assume the position of prime minister.

There are other examples of nonfollowers of God serving respectably in God’s cause. The last individual we will consider is the Ephesian city clerk. Acts 19:23–41 details the worries of the idol makers as the apostle Paul and other members of The Way introduced the city to the One True God. This inflamed Demetrius, a local silversmith, who inflamed his fellow craftsmen, which ultimately led to a riot, murderous threats to the believers, and a two-hour chant of “great is Artemis of the Ephesians!” (v. 34, NIV). The entire city was in an uproar. But eventually, “the city clerk quieted the crowd and said: ‘Men of Ephesus, doesn’t all the world know that the city of Ephesus is the guardian of the temple of the great Artemis and of her image, which fell from heaven? Therefore, since these facts are undeniable, you ought to be quiet and not do anything rash. You have brought these men here, though they have neither robbed temples nor blasphemed our goddess. If, then, Demetrius and his fellow craftsmen have a grievance against anybody, the courts are open and there are proconsuls. They can press charges. If there is anything further you want to bring up, it must be settled in a legal assembly. As it is, we are in danger of being charged with rioting because of today’s events. In that case we would not be able to account for this commotion, since there is no reason for it.’ After he had said this, he dismissed the assembly” (vv. 35–41).

So, from the intervention of these seven “unbelievers,” what might we conclude? First, labeling others is wrong; it is counterproductive; it is un-Christlike. We do not know the hearts of others, nor are we aware of how God might use them to further His work and, in the process, gain their own salvation. Second, the apostle Paul reveals to us a reality that Satan is tirelessly working to hold back unbelievers from advancing in faith (2 Cor. 4:4). So, our prayers on behalf of the least likely are crucial. And finally, the apostle Paul, a specialist in reaching Gentiles with the good news, admonishes us to avoid giving offense to anyone. We are called to embrace, not embarrass; to run to, not run from; to break down walls, not build them up. Paul’s message is to Corinthian and contemporary believers: “Do not cause anyone to stumble, whether Jews, Greeks or the church of God—even as I try to please everybody in every way. For I am not seeking my own good but the good of many, so that they may be saved” (1 Cor. 10:32, 33).

comments powered by Disqus
A. Jane Sabes, PhD, is a former principal of Newbold College of Higher Education, Bracknell, England. She is a certified chaplain residing in Oklahoma, United States.

Crises in our world—Christ in our hearts

Entrusted with His treasure

The tests of a prophet