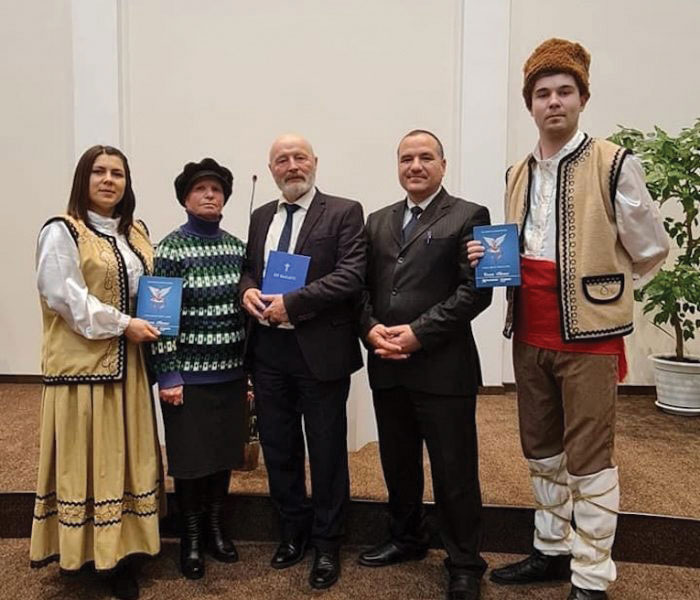 Adventists in Moldova Celebrate Bible Translation on Its Anniversary

The first edition of the Gagauz Yeni Baalanta (New Testament) was published in 2006, five years after Bayraktar’s death. Bayraktar had been not only a translator but also a preacher of God’s Word in that language.

The Gagauz New Testament was published in two formats, one in Cyrillic and the other in Latin characters. It was something, Bayraktar had explained, that helped the text to be friendly not only to the older but also to the younger generations, many of whom are not fluent in Cyrillic reading.

As part of the March 6 ceremony, attendees participated by praying, singing, and reading Scripture in the Gagauz language.

Church leaders celebrated that ethnic Gagauzes can read the New Testament in their native language and highlighted the unchanging and vital role of God’s Word.

“We continue to believe that ‘All Scripture is given by inspiration of God, and is profitable for doctrine, for reproof, for correction, for instruction in righteousness’ (2 Tim. 3:16),” they said. [Ruslan Bulgak, EAD News/Adventist Review]

Juice bar is a center of influence in Fiji

Votualevu, Namaka, and Nadi English Seventh-day Adventist churches teamed up to open Bitu Wellness Bar, or Bitu Bar, as it is commonly known, in the heart of the nation’s tourism capital, Nadi.

With rapidly increasing rates of NCDs, Fiji is in the midst of a public health crisis that is closely linked to changing lifestyles. The three churches have taken on the responsibility to fight against these lifestyle diseases, which have become the number-one killer in the country.

“It is through the message of health that we are sharing God’s love to our customers, who are secular or members of other Christian denominations,” said George Kwong, Bitu Bar founder. Kwong is also the coordinator for the 10,000 Toes health initiative for the Trans-Pacific Union Mission of the Seventh-day Adventist Church.

While herbal juice in Fiji has been used for centuries to cure cuts and illnesses, it has not been widely consumed as a means for improving holistic health. By visiting Bitu Bar, Fijians are encouraged to revisit a more natural, holistic approach to health.

“With the Bible as our main charter, this joint venture has been a direct result of the church’s pillar of comprehensive health. And why look further than our own backyard, where we find everything that God created for our use?” Kwong said.

“[Seventh-day Adventist Church cofounder] Ellen White also encourages us to find simple remedies all around us. We are seeing these natural remedies [more often], which are now being touted around the globe as superfoods from medical and pharmaceutical experts,” he explained.

“Now medical practitioners and other professionals are lining up at the bar, which is a positive sign that the Fijian population is serious about their health.”

“If other churches would like to open similar bars in their communities, they are welcome to contact us,” Kwong said. “This is an initiative with genuine intentions to build a better and healthier Fiji.” [Isaac Lal, Adventist Record]

After a year that has been stressful and often tragic, thousands of ministers and their families set apart time to pray, fellowship, and be encouraged. Coined as the Inter-American Division’s Annual Pastoral Family Week of Prayer, the event provided strength to the 4,028 local church pastors and pastors in administrative and departmental leadership positions that oversee more than 3.7 million members in more than 23,000 congregations and institutions across the territory of the Inter-American Division.

Despite church buildings being closed, pastors have continued to shepherd their members and to do the work of reaching out to new believers according to Pastor Pedro Iglesias, Family Ministries director of the Inter-American Division. More than 94,000 new members joined the church in 2020, and leaders believe that number will surpass 100,000 as reports continue to come in.

This year’s speaker was Seventh-day Adventist evangelist Alejandro Bullón, whose theme was “God Our Strength” based on Psalm 46. Bullón encouraged families to love their pastoral ministry regardless of the difficulties that they face every day. In addition, he spoke to pastor’s kids and encouraged them to live a life dedicated to God.

“So many pastors, spouses, and family members have passed away during the pandemic,” he said. Inter-American Division president Elie Henry prayed for the pastoral families and thanked them for their dedicated service.

Reflections on the pandemic and final events

Making appeals and getting decisions

If the Cross could speak