Charles E. Bradford, the first president of the Seventh-day Adventist Church’s North American Division (NAD), passed away on Thursday, September 9, 2021, in Huntsville, Alabama. He was 96.

Bradford was born in Washington, DC, on July 12, 1925, to Robert and Etta Bradford. Etta Littlejohn, born in Mississippi, became an Adventist by attending Bible studies on the Morning Star riverboat and was one of the first 16 students to attend Oakwood Industrial School (now Oakwood University) in Huntsville, Alabama, in 1896. There she met Robert Bradford, from Alabama, who was part of a group of early black Adventist ministers who provided a solid foundation for Adventism among African Americans.

Bradford privately and publicly prodded church members to address racial crises. In 1964, while president of the Lake Region Conference, he wrote a letter to then General Conference president R. R. Figuhr eloquently and passionately urging him toward a more progressive view of race relations. In 1966 he wrote a paper to the GC Session on the great need for the Adventist Church to engage in improving the condition of blacks in America. Among other things, he stated: “The Negro Seventh-day Adventist is perforce affected by the tension and the drama of his people’s struggle for justice and equal rights. Half measures and token gestures do not satisfy now.”

Nine years later, Bradford was elected associate secretary of the GC, serving in that role until he was elected NAD president in 1979, a historic election reported in secular newspapers, including The New York Times and The Washington Post.

G. Alexander Bryant, current NAD president, stated, “Elder Bradford had a rare collection of passion, grace, power, and humility. He made an incalculable impact on our lives, on our church, and on our world. Indeed, a prince of Israel has passed away, but his legacy lives on.”

Ted N. C. Wilson, president of the General Conference of the Seventh-day Adventist Church, said, “Elder Bradford was a giant in so many ways—faithful follower of Christ, wonderful preacher, diligent Bible student, dynamic intellect, experienced administrator, caring pastor, loving husband and father, encouraging brother in Christ, and long-time friend. . . . May the Comforter come especially close to the entire Bradford family at this time of sorrow. Soon, however, Jesus will come, and we will again see Elder Bradford and our loved ones who have died in Christ. What a day that will be! Even so, come, Lord Jesus!”

Bradford, a graduate of Oakwood University, was awarded a doctor of divinity degree from Andrews University. He is the author of several books, including The King Is in Residence, Find Out About Prayer, and Sabbath Roots: The African Connection. [Kimberly Luste Maran, North American Division News]

Thousands of Adventists march against domestic violence in Brazil’s capital

More than 300 Seventh-day Adventist congregations in Brasilia, Brazil, and surrounding areas organized various activities to raise public awareness and fight against domestic violence on August 28, 2021. Adventist schools across the region and beyond also took part in the day-long activities.

A march against violence is promoted annually in eight South American countries. The campaign also encourages forums, educational fairs, and antiviolence programs throughout the year. Although the campaign has a different focus each year, it always seeks to make people aware of the need to respect and value women, children, and the elderly. 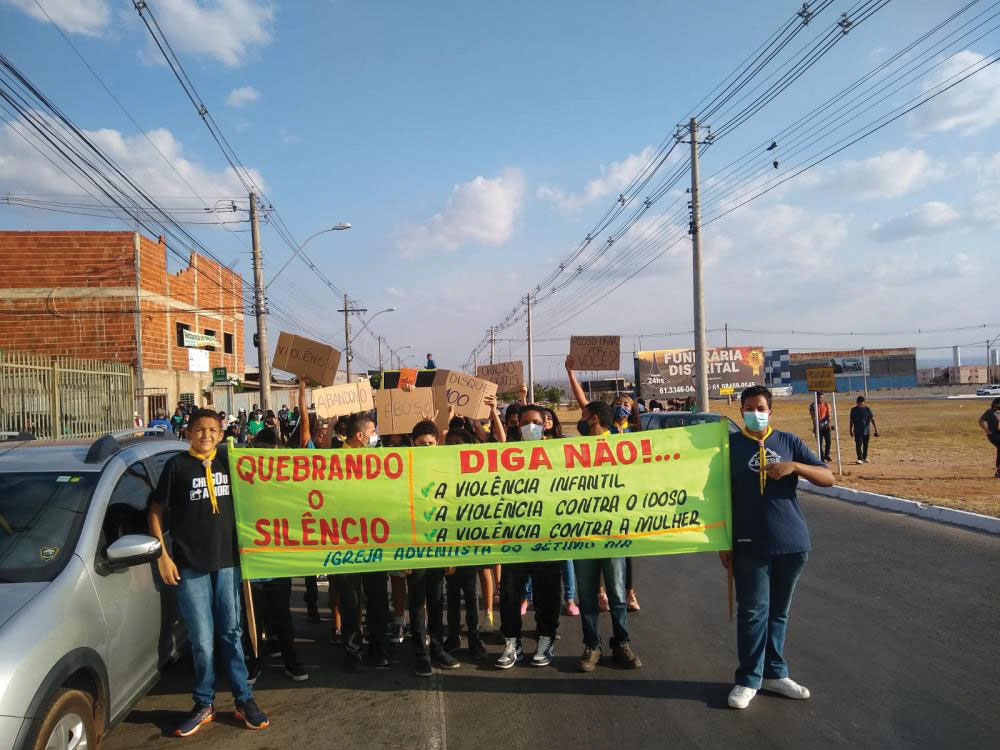 Anny Gill, who leads Adventist Women’s Ministries across the Central Plateau of Brazil, emphasized that the project’s primary goal is to help victims talk about violence and overcome it. “We understand that when the victim speaks up and protests, she inhibits the aggressor,” she said. “When victims stop being silent, it is easier for the abuse to stop.”

In the Novo Gama district, the Adventist congregation organizes an annual motorcade 10 kilometers (6 miles) long to promote the event. Program coordinator Alvany Fonseca said that cars are decorated with balloons and banners reading “Say ‘No’ to Violence.”

Leaders encourage victims to report abuse. “When we get to know about a case [of abuse], we guide and refer the victim to the relevant agencies,” Fonseca said. [Rafael Brondani, South American Division and Adventist Review]

From bar to baptism

Anna Charles, from the Mbeya region in Southern Tanzania, heard about the everlasting gospel through television. A purveyor of beer, she became famous through her bar and made many friends through her business. Anna felt the Holy Spirit directing her to set up a pavilion in the territory of her bar, so that the Seventh-day Adventist Church could use it as an evangelistic center during an evangelistic campaign aired through the media, “Shangwe Katika Njia Yake,” a Kiswahili phrase meaning “Joy in His Way.”

The three-week campaign, in July 2021, attracted thousands of people to Jesus. Those who came to drink from Anna’s bar were watching a big screen. During the second week of the meetings, Anna made a decision that surprised many people—she decided to accept Jesus. She got rid of the beer and other alcoholic beverages that she sold in her bar. She was baptized along with 11 other people—all of whom heard the gospel in her bar. [Herbert Nziku, Southern Tanzania Union Mission]

A funeral homily beyond the usual

Living with an eternal purpose