In 2020, the coronavirus pandemic had a massive impact on the worldwide distribution of the Bible, according to a recent report by the United Bible Societies (UBS). The UBS recently shared that in 2020, only 30 million complete Bibles were distributed, a quarter less than in 2019.

“The COVID-19 pandemic has severely restricted the work of many Bible societies,” Horst Scheurenbrand, director of international programs for the German Bible Society, said. “Numerous projects ended up being scrapped, and events had to be canceled due to contact bans. Also, production and supply chains were temporarily restricted,” Scheurenbrand explained.

In the first year of the pandemic, digital Bible editions represented a growing Bible sales and distribution segment, the report stated. In 2020, 38 percent, or more than one in three Bibles, were downloaded in a digital format. The number of Bibles issued for computers, tablets, and smartphones more than doubled compared to the previous year. The most frequent downloads were in Brazil, followed by the United States, Mexico, Colombia, and the Philippines.

The annual Scripture Distribution Report considers only the figures of publishers and organizations that belong to the United Bible Societies, an international association of 160 national Bible societies. Bible societies are active in 184 countries. [Adventistischer Pressedienst (APD) and Adventist Review] 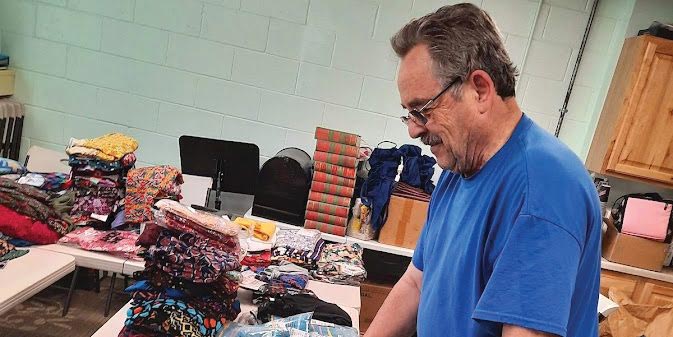 The desperate airlift out of Kabul, Afghanistan, had barely kicked into gear in August 2021 when a call went out to the state of Wisconsin’s Voluntary Organizations Active in Disaster (VOAD) group. The sudden collapse of the Afghan government created an urgent need for clothing to help the displaced Afghans arriving in the United States with only the clothes they were wearing.

Wisconsin Conference Adventist Community Services (ACS) director Alice Garrett learned that 12,600 migrants were arriving at Fort McCoy, an army base some 170 miles (270 kilometers) from Milwaukee. In this location, the refugees would be processed before most were dispersed to other states.

Garrett emailed the Wisconsin pastors and Seventh-day Adventist churches asking for new clothes for men, women, and children. “The response was overwhelming,” Garrett said. “Pastors and members responded, and we delivered 95 boxes with an estimate of 2,000 items. What a blessing!”

Since the need for clothes remained high after the first effort, Garrett decided to request another clothing drive, this time for a longer period. She dashed off another email to pastors, ACS leaders, and certified volunteers to start another collection, this time focusing on winter clothing, such as jackets, boots, and warm sweatshirts.

Once again, a crush of items came in. Volunteers sorted about 1,300 items and packaged the goods in 94 boxes labeled with the contents. This brought the total to 189 boxes and 3,300 items collected in just one month.

During this period, more than US$10,000 in monetary donations was received from Wisconsin church members and individuals in Michigan and Minnesota. “Every penny will go to help these people,” Garrett said. “We have and are continuing to purchase what is the immediate need, and that includes a lot of winter coats, underwear, toddlers’ clothes, and infant formula.”

Derrick Lea, NAD ACS director, said, “I rely on Alice and her team of dedicated team members to rally our church members to respond when calls for help go out. It’s a privilege to work with those willing to be the hands and feet of Jesus in their local communities.”

As of September 29, more than 300,000 clothing items had been processed and Fort McCoy is transitioning into resettlement and relocating the refugees. [Alice Garrett, with Lake Union Herald staff]

Members of the General Conference of Seventh-day Adventists Executive Committee paused during Annual Council meetings on October 8, 2021, to remember scores of church workers and missionaries who became infected by and ultimately lost their lives to COVID-19, starting in August 2020.

The Adventist Mission office put together a video that included the names, ages, and positions of some of the workers who passed away during the pandemic. “As we know all too well, COVID-19 has killed millions, and we have also lost many Adventist believers and church workers, our colleagues in mission to the pandemic,” the video’s narrator said. “These dedicated workers fell in the line of duty, carrying a message of hope to a dying world, a message of hope in [Jesus’] soon return.”

The nine-minute video, which General Conference president Ted N. C. Wilson described as “an amazingly touching presentation,” opened by showcasing the experience of missionary Manuel Bellosillo. Bellosillo, a 67-year-old Filipino physician in Cameroon, was the first to become infected and die from the virus in August 2020.

The showcase list included pastors, administrators, evangelists, health workers, teachers, literature evangelists, and office workers. The disease affected not only many seasoned workers but also young missionaries. Among the workers were 42-year-old David Apu Baroi, an Adventist mission volunteer in the Bangladesh Union; 31-year-old Levi Hernandez, a pastor in the Central Tabasco Conference in Mexico; and 20-year-old Ingrid Garcia, who was a women and children’s ministries director within the East Andean Venezuela Mission.

The tribute closed with an invitation for church members to look forward to the day when, according to the Bible’s teachings, those who died in the Lord will be raised to new life and welcomed to live with God. “Well done, good and faithful servant,” the video’s narrator read, quoting Jesus’ words in Matthew 25:23. “Enter thou into the joy of thy Lord.” And it closed with, “Until we meet again on that glorious day.” [Marcos Paseggi, Adventist Review]

Giving appeals during a global crisis:

Lessons from the apostle Paul

Lessons from a pandemic