The Teachings of the Group

The group is not a sect. It has no church, neither does it have any members. You cannot belong to the Group. Members from all denominations and even from all non-Christian religions are welcome to partici­pate in the activities of the Group. No transfer of membership is necessary, for the aim of the Oxford Group is to change the world by changing the individual. 'One man changed. A million changed. A nation changed. That is the program of the Ox­ford Group."—FRANK BUCHMAN, Remak­ing the World, p. 20.

This change can be attained by following the teachings of Christ in His Sermon on the Mount, summarized under four heads, called the four absolutes: Absolute Honesty, Absolute Purity, Absolute Unselfishness, and Absolute Love.

What does the Group mean by "Shar­ing"? We will let them answer for them­selves:

Sharing of sins as practiced by the Oxford Group is sharing in the ordinary sense of the word; in plain language it is telling, or talking over, our sins with another whose life has already been sur­rendered to God or, if we have already surrendered, assisting others to surrender by openly—as we are guided—laying our past sins or present tempta­tions alongside theirs, so that they may be able better to recognize and bring to light these sins which have stood between them and God.—Ibid., p. 27.

Telling our sins to a practising Christian, as we would tell our physical symptoms to a medical practitioner, enables us not only to find the cure for our spiritual sickness but find out how to take on a new lease of spiritual health.—Ibid., p. 29.

The Oxford Group believes, and rightly, that once We have shared our sins with another Chris­tian and surrendered them to God our sins are best forgotten.—Ibid., p. 22.

It is this "sharing.' that is most criticized by those that do not belong to the Group:

The act of sharing offers not only a possibility but a probability of danger. Under the stress of the group situation false emphasis is undoubtedly given to past occurrences... One sharer confesses a vague attitude of pride and seems proud to have located the danger. Another has had such tempestuous sex thoughts that he must recount them publicly. The repetition of these affairs in some instances resembles boasting rather than confession, and in nearly all instances gives a status to trivial matters that is not warranted. The stories begin to take on more and more of the spectacular. This gathers momentum and even a guided chairman cannot stop it—DOUGLAS J. WiLsoN, "A Critique of Buchrnanism" in The Christian Century, Aug. 23, 1933, pp. 1060, 1061.

We have no controversy with points 2 and 3 of the four practical spiritual activi­ties, but we do with point 4, which speaks about "listening" and "guidance." We will let the Group explain for themselves what they mean by these terms:

A Quiet Time with the Holy Spirit every morn­ing before the "daily toil and common round" of the world commences will put us in the right key for the day. These early morning Quiet Times in which God impresses on our minds His counsel become living spots in the routine of ordinary life. The Oxford Group advocates our use of a pencil and notebook so that we may record every God-given thought and idea that conies to us during our time alone with Him, that no detail how­ever small, may be lost to us and that we may not shirk the truth about ourselves or any prob­lem, when it comes to us."—What Is the Oxford Group? pp. 67, 68.

The importance of listening is most clearly brought out in the words of Frank Buchman himself:

When man listens, God speaks. When man obeys, God acts. The secret is God-control. We are not out to tell God. We are out to let God tell us. And He will tell us.

The lesson the world most needs is the art of listening to God. . . .

For this point of their teaching the Group has also received the most vehement criticism:

"Guidance," with the mind entirely relaxed, and surrendered, is dangerous. . . . Buchman's definition that religion is a matter of the will is wrong. When God renews man, He renews his intellect as well as his emotional life and his will. Nor has God given us our intellect to set it aside. .. Dr. G. H. Stevenson, a Toronto physician, wrote in The New Outlook, "The hallucinatory 'voices' of the mentally ill, the spirit voices of our spirit­ualist friends, the 'guidance' of the Oxford Group, are as closely related as children of the same parents, and the parents of these three unusual children are a sensitive, emotionally unstable per­sonality in union with the longing for happiness in some other world than the one God has given us." —J. K. VAN BAALEN, The Chaos of Cults, p. 265.

We are the only creatures in this world that have been endowed with a mind. We have a sacred duty to develop that mind. God allows us even to make mistakes in order to learn our lesson of life, just as we allow our children to fall in their effort to learn to walk. Just as we like to see our children become independent, so does God like to see us take the initiative. We may certainly count on His help when we have reached our extremity, and He sometimes does help, but very often He does not inter­fere. Will we then have to conclude that He is not leading us any longer? Surely not, for He is guiding us continually, even in those instances in which we are apparently left alone. As a wise parent He does not always give us the answer to our problems or the helping hand in our stumbling, for He is interested in seeing us exert ourselves and develop the resources He has given us. But the Group has carried this matter of "guidance' to extremes, as can be seen in the words of Professor Spoerri former Rec­tor of Zurich University, who is a staunch supporter of the Group:

But what Frank Buchmasi has given us today is the truth that every ordinary person can be in­spired by God. This is new in history. Think what it means for history that every single person, worker, factory owner, professor, student, woman, can receive guidance from God. This is the begin­ning of a new epoch. I am a historian. I have studied the new beginnings throughout history, and here is a new beginning that has never hap­pened before.—Quoted in Geoffrey Williamson, Inside Buchmanism, p. 174. (Italics supplied.)

That far will Buchmanism go in its be­lief in "guidance." What will be the end of the conflicts if everybody would believe himself to be inspired? There would be more conflict and bloodshed than ever be­fore, and more bigots than the world has ever seen. Professor Spoerri may know his­tory, but he evidently does not know hu­man behavior. God forbid that all men will get the idea of being inspired!

The chief means Buchmanism has of propagating its beliefs is through the "house parties." A house party is an in­formal gathering of members of the Group to which visitors are invited. A lunch or dinner may be served during which they share their Christian experiences with each other. This witnessing results in the con­version of visitors. These parties later de­veloped into the large gatherings of world assemblies held at the various centers of the Group. However, they are in principle still the same house parties, though carried on in a more organized way. The spirit of informality is still maintained as much as possible, which makes it easier for outsiders and especially nonreligious people to join the members. Most of these gatherings are held in the mansions of the rich or in the ballrooms of first-class hotels so as to attract the rich and the important people. This has been done with great success. What the Salvation Army has been doing for the "down-and-out," the Group is doing for the "up-and-out."

There are several good things that we may learn from the Group. We can fully subscribe to their "four absolutes," which are based on the Sermon on the Mount. Their idea of restitution would have tre­mendous results if practiced in the churches. Their fixed hour for a quiet time in a busy world where few take time to listen to the voice of God as it speaks to us through His Word, would bring more quietude in the hearts of men and women. It is impera­tive to cultivate this habit in order to grow in grace. "All who are under the training of God need the quiet hour for communion with their own hearts, with nature, and with God."—The Ministry of Healing, p. 58. 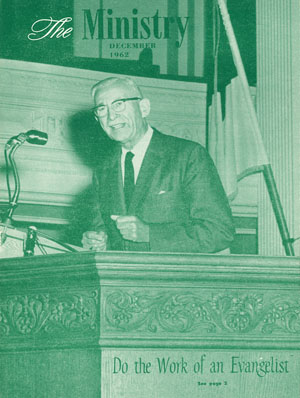